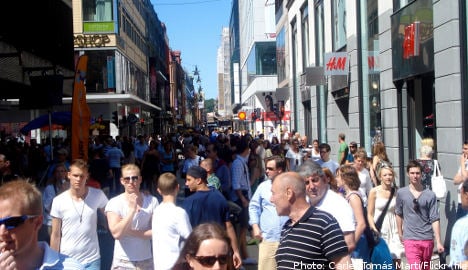 ”When the population is expected to grow by two bus loads of people every day until 2020, there is an increased need of new investments in the capital city region,” said Maria Rankka, CEO of the Chamber in a statement.

According to the chamber’s predictions, the Swedish capital is one of Europe’s fastest growing cities, growing almost twice as fast as London.

Rankka believes that if the city is to cope with this development, the authorities need to invest in housing, public transport, education and other services.

The region is also drawing in a lot of young people, according to the study.

”There are a lot of young people attracted by the city and only Amsterdam and London have a younger population,” Rankka said.

But demographics expert Åke Nilsson told newspaper Metro he is concerned that there could be even more Stockholmers in ten years than predicted by the chamber.

”There’s an enormous pressure and it is important that the needs of the population will be met. The infrastructure simply isn’t up to it and more housing has to be built,” he told Metro.