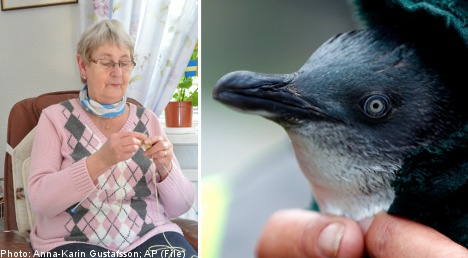 “I bet there are about 40 people working on the sweaters,” Anna-Karin Gustafsson, one of the organizers of the initiative, told The Local.

Gustafsson is the treasurer of a Kreativitetshuset Lyan, a local community centre located in Österbymo in central Sweden which decided to take action to help New Zealand’s freezing penguins.

Hundreds of the country’s native blue penguins found themselves caught up in an oil spill caused by the grounding of a cargo ship in early October.

When penguin feathers come in contact with oil, it opens up channels in the birds’ densely packed feathers, allowing water to penetrate through to their skin, making it hard for them to keep warm.

Last week, Gustafsson and her colleagues learned of an initiative launched by a New Zealand yarn store calling on fleet-fingered knitters around the world to produce penguin-sized jumpers to help the birds stay warm until they are well enough to be properly washed and to prevent them from ingesting the oil stuck to their feathers.

“It seemed obvious that we should do a little something that could make a difference between life and death for these little penguins,” said Gustafsson, a self-proclaimed “animal nut”.

An appeal put out on Facebook earlier in the week prompted an overwhelming response from the local community and also caught the attention of the national media.

“The hardest thing was actually getting a hold of enough of the right kind of yarn,” Gustafsson explained.

By Wednesday, the community centre had distributed “tonnes” of patterns to members young and old, who, by the end of the week, were all busy knitting as fast as their fingers allowed, according to Gustafsson.

“My mother-in-law has already finished three sweaters,” she said, adding that the group has set a goal of producing 100 penguin jumpers to send to New Zealand by the end of next week.

Once the sweaters are collected, Gustafsson and her colleagues plan to ship them to the yarn store in New Zealand that started the campaing, which will then see to it that they end up on the backs of the oil-damaged penguins.

She said the entire project has been an uplifting experience for her.

“It’s great for the penguins. And it shows that when everyone pitches in, anything is possible,” she said.

When asked whether any plans are afoot for members of the Lyan community centre to travel from Sweden to New Zealand for a first hand look at the penguin sweaters in action, Gustafsson said that nothing has been organized yet.

“But it’s not impossible. We’ll see where things go. It would be fun to see the penguins dressed up in the sweaters we made,” she said.