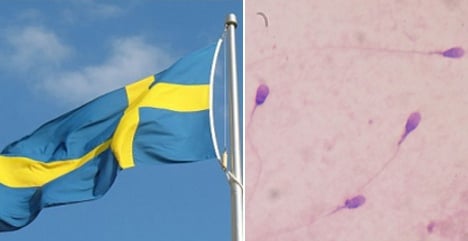 The study, conducted at Linköping University in central Sweden, shows that sperm donors score better in aptitude tests on responsibility, confidence and self-acceptance than other men.

“The men who are accepted for the program were all in the normal range of character and also demonstrated a mature personality and a stable character,” said the study’s main author Gunilla Sydsjö to news agency Reuters.

Sweden was the first country to pass a so-called “non-anonymous” law, giving children the right to know the identity of their sperm donor father.

Later Britain, Australia and other countries have also followed suit.

However, in the US donors are allowed to remain anonymous and are also paid for their sperm, unlike Sweden, where men can only volunteer to become a donor.

The study also showed that the main reason for Swedish men’s decision to donate sperm seems to be altruistic.

“Often they know someone who has not been able to conceive and therefore they want to help others in the same situation. No one ever asks what he can gain from donating. But they do both individual people and society a huge favour,” Sydsjö said in a statement.

However, according to Sydsjö, the non-anonymous laws “might be a problem, and for both parties since no one can prepare themselves for their reactions” if a child decides to contact the biological father.

“A decision made at the age of 25 might be crystal clear for the individual at that time but might take on other dimensions 20 years later,” she told Reuters.

Sydsjö and her team surveyed 115 men who had donated sperm at Swedish clinics between 2005 and 2008, and compared the results to those of similar age who hadn’t attempted to donate sperm.

The study also showed that 43 percent of Swedish donors were married and 36 percent had children of their own.

The findings have been published in the British Journal of Obstetrics and Gynaecology.