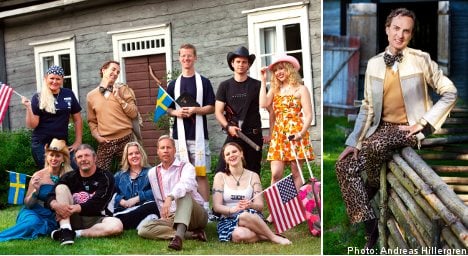 Feelings of rootlessness are something many immigrants and expats have struggled with, and a new Swedish reality TV show offers ten Swedish-Americans a chance to visit the land of their forefathers and gain a glimpse into their past.

Viewers tuning into Sveriges Television’s (SVT) Channel 1 on Sunday nights may have come across the distinct sound of American-style English, not to mention a few lines of heavily-accented Swedish.

The lines likely flowed from the mouths of one of the ten Swedish-Americans brought over to Sweden in the summer of 2011 in search of pieces of their family puzzle as participants in “Allt för Sverige” (Everything for Sweden), a new reality TV show currently airing on SVT.

In true reality television fashion, the contestants were eliminated one by one, until there was only one left to receive the ultimate prize – a family dinner with their long-lost Swedish relatives.

“I think it’s very beautiful and something that separates Swedes from Americans. They want to conquer a prize most Swedes would chop off an arm to avoid,” the show’s host Anders Lundin told the Nöjesbladet newspaper.

One of the 10 Swedish-Americans who took part to battle it out for a meet up with the extended family was interior decorator and jewelry-and-bow tie designer, Guy Clark from New York.

His great grandmother, Anna Maria Pehrsson Jacobsen, left the poor and religiously intolerant Sweden in 1886 along with roughly 1.3 million other Swedes during that period, with hopes of a better life in America.

“In the United States, half my family is well-known, and the other half, the Swedish half, I don’t know anything about,” Clark tells The Local.

Clark had had Swedish food around Christmas time, and his sister wore a candle crown, just like Saint Lucia, but that was about as much he had experienced of his forefathers’ traditions.

That is until his Swedish masseuse introduced him to a Swedish television producer.

“She said ‘hey listen, we’re looking for a crazy gay guy who has a Swedish background but has never been to Sweden and doesn’t know anything about his background’,” Clark recalls.

“Every chance you get to do something new in life is a bonus, and I love new experiences, so I was all up for it.”

Along with nine other souls curious to trace their roots, Clark flew to Denmark to travel by boat over to the southern Swedish province of Skåne last summer.

After a long and rocky boat ride, they all landed on Swedish soil for the first time, and Clark sat down and kissed it.

What Clark didn’t realize was that he was actually in Torekov, the same coastal community that his forefather Pål Romare had once been an integral part of.

While on a stroll around town, Clark and a few of the other contestants stumbled upon a map which revealed their whereabouts.

“I was so overwhelmed,” Clark says with a shaky voice, his eyes welling up.

“I have heard about this town my whole life. My sisters, my mother, my grandmother heard about it their whole life, but we just don’t know anything.”

But the fact that the unknowing Americans were first brought to Torekov, and then Båstad, two extremely wealthy and picturesque towns, was also criticized in the Swedish media.

It was questioned whether they would actually get to see the “real” Sweden, such as the concrete suburbs or the fact that pizza and Thai food are probably more common than meatballs and herring, an Aftonbladet columnist Svante Lidén complained.

But Clark doesn’t agree with the critique.

“But I saw all kinds of weird, strange and unusual things,” he argues.

Since he can’t reveal how far he made it in the contest, Clark didn’t want to get into details, but he feels certain he got to see many different sides of Sweden.

“You know, Stockholm is beautiful but it’s kind of like a Stepford village… where everything is perfect. But going to parts of Sweden that were not as put together as this, you could see that not all of Sweden is like here.”

As it would turn out landing in the town of his 18th century ancestor was not the only surprise in store for Clark, who also happened upon his grave stone in a public park.

“I feel like I got almost everything that I came for immediately. All my other days were a bonus.”

What he got to experience during his “bonus days” has now enabled him to develop an emotional attachment to Sweden that he never thought he would find, he said.

“I found another home and I have every intention to move here part time. I love it here, I think it’s a perfect society for me.”

Another premise of the show that caused rankled critics was that only one of the 10 contestants was actually going to be able meet his or her family.

However, the shows second episode, revealed that to not be entirely true.

“We believed that if we left, we got zero,” Clark says.

What really happened was that the eliminated contestant was handed an envelope with all the phone numbers and addresses of the relatives that Sveriges Television had found and spoken to.

Although, to Clark’s knowledge, he is the only one to have made a return journey to Sweden.

Next summer he will be bringing his family back to Torekov for a big party with the families from both sides of the pond.

“First thing my family said when I came back was, ‘when are we going’,” Clark says, explaining that developing this link has become the most important part of the story.

Travelling back to Torekov will also give Clark a chance to look for a possible home, and the peace that a busy working life and the responsibilities of a large family seldom allows him.

“Sometimes I would just like to turn everything off and not shave or put a bow tie on for one day, and just relax and read a book,” he says.

“It’s very difficult. Maybe in Sweden I can let that happen.”

Allt för Sverige airs on Sundays at 8pm on Svt1. The episodes can also be found on their website, SVT Play.