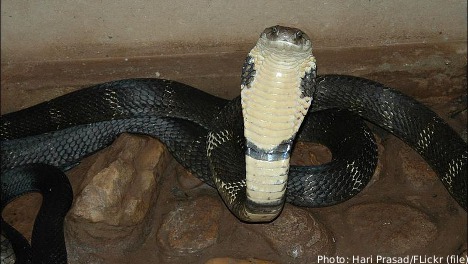 The man, who is a snake breeder, travelled from China to Sweden with the reptiles.

But his trip ended at customs at Arlanda Airport when the contents of his baggage were revealed, according to a report in the Metro daily.

The reptiles were packed in various plastic containers and two of the snakes were found to have died in transit.

The man has now been sentenced to 60 hours of community service for smuggling.

According to Attunda District Court, the man was aware of the risks of his venture.

While he claimed that he received the animals as a gift and took a spontaneous decision to transport them back to Sweden, the court noted that a courier package from Hong Kong had previous been stopped in transit to the man.

When the mailed package was seized and opened, officials found five snakes in two containers marked “toys”, two of which were king cobras, the world’s longest venomous snake and a protected species.