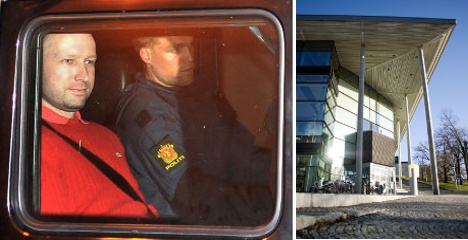 ”The contents in his blogs are on every point contrary to everything the university stands for,” said university dean Tomas Berglund to Sveriges Television (SVT).

The man, who had received his placement with the university from local authorities in Härnösand, northern Sweden, describes himself as a radical conservative and used his blog to spread a number of xenophobic and right wing extremist views, according to SVT.

The man had furthermore been blogging during working hours and on more than one occasion expressed his sympathies for Norwegian terrorist Anders Behring Breivik.

According to SVT there were also blog entries that could be interpreted as urging armed resistance against a multicultural society.

The trainee was employed at the Department for Humanities at the university campus in Härnösand.

”I was made aware of his blogging activities last week. We immediately took the decision that he should be relieved of his duties at the department,” said Berglund to SVT.

”Breivik was too impatient” and ”Utöya – a second class Auschwitz” were among the statements the man had made public on his blog.

”In that case, the war has started. Breivik saw himself as a soldier in that war. But what’s with the impatience? Well, I for one, think that the PC regime will fall within the next few years,” the man wrote on his blog, according to SVT.

Despite running one Swedish language blog, one English language blog and having published several books online, all with the common theme of a new society emerging from the rubble of the old, the trainee was not known to the Swedish Security Service, Säpo.

”But this material seems interesting and the connection to Breivik especially makes me react,” said Dick Lindberg of the Security Service in Umeå to SVT.

The man has been dismissed on the grounds of blogging during working hours, but according to the university it was also the content of the man’s writing that made them decide to relieve him from his duties.