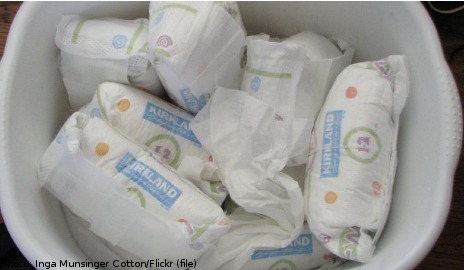 ”It feels unreal, and it is a terribly unpleasant feeling because we don’t know what it’s all about,” said local preschool head Carina Bryngelsson to The Local.

Norrgårdens preschool in Iggesund, close to Hudiksvall, on the east coast of Sweden, was first to be struck by the daring dirty diaper distributor.

“We came back to work after the weekend to find the diapers from our garbage strewn around the school area,” said Bryngelsson.

At first, staff thought it was a simple teenage prank but when the same thing happened again the weekend after, Bryngelsson decided it was time to get a lock for the bins and report the matter to the police.

Since taking these precautions, the preschool has been spared further visits by the messy marauders, but cut off from the mother lode, they bin diving-nappy snatchers have begun targeting the houses of people living in the nearby residential area.

One parent told the local paper Hudiksvalls Tidning (HT) that someone had gone through her bin over night and removed a large quantity of used diapers.

“About 200 diapers had been placed in the playground. It felt extra unpleasant that they had been unwrapped,” she said.

According to Bryngelsson, parents in the neighbourhood are getting increasingly uneasy about the whole thing.

“From what I have heard, some people are choosing to remove toys from their backyards and around their houses, so as to not advertise that there are children living there and avoid having their bins raided,” she told The Local.

Josef Wiklund, head of the police crime prevention unit in the area, told HT that he has never before heard of perpetrators who concentrate solely on excrement.

”I completely understand if people are getting upset and worried, that it is both irritating and insulting,” he said, adding that the police would welcome any information from local people who might have seen or heard anything.