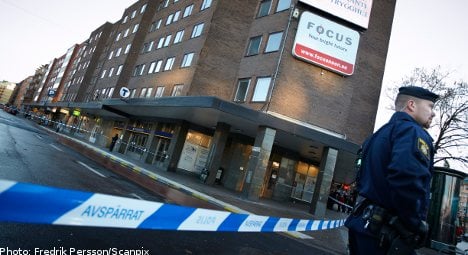 Fire fighters who have been down in the tunnel have confirmed smoke in the area.

“But we don’t know where it’s coming from, whether it’s inside the tunnel or from the train,” Magnus Bengtsson, head of operations at the Greater Stockholm Fire Brigade (Storstockholms brandförsvar), told news agency TT.

According to Bengtsson, traffic on the green line is stopped completely between Fridhemsplan and S:t Eriksplan. On the blue line, trains pass Fridhemsplan without stopping.

Emergency services SOS received calls about a smoke-filled carriage, and later reports of a clap and flashes.

SOS Alarm received the first call at 8.30am, but roughly ten minutes later it was still unclear what had happened.

“Passengers have been evacuated to the Fridhemsplan subway stop,” said an SOS Alarm operator to TT.

Just before 9am there were at least six emergency services cars on the spot, and three more on the way, according to SOS Alarm. There were also two ambulances outside the subway station, but there are no reports of any train passenger having been injured.

“We don’t know yet,” said the operator to TT.

Several police patrols have arrived at Fridhemsplan, which is in the Kungsholmen neighbourhood.

According to the police, the train is standing on the tracks between subway stops Fridhemsplan and S:t Eriksplan.

“People began spontaneously evacuation via both stations, and we’re now taking them out through Fridhemsplan,” said Stefan Färdigs, press spokesman at the Stockholm police, to TT.

According to him roughly 12-15 police patrols are working in the area, and all train traffic has been stopped between both stations.

The police don’t know what caused the smoke, however.

“We can’t see any smoke in the carriages, and we have no reports of any physical injuries,” said Stefan Färdigs.