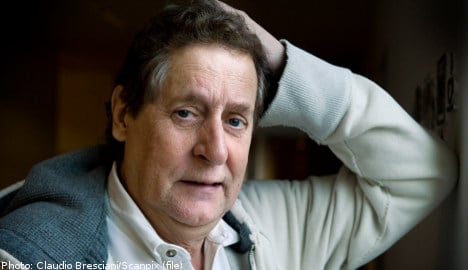 Brandeby, known recently from his performance in the popular television show Let’s Dance, lived to be 66-years-old.

“It is with great sadness and regret we must inform you that our beloved Lasse Brandeby has passed away after a brief illness. On 20th November 2011 Lasse passed away surrounded by loved ones,” Brandeby’s partner Ninnie Fjelkegård, daughter Anna Brandeby Harström and friend Lasse Kronér announced in an email.

Lars Brandeby was born in 1945 and had a number of occupations before he entered the School of Journalism in Gothenburg in 1979, including serving as a high school teacher, a taxi driver, and a petrol station attendant.

After just one year at the school, he began working as a reporter at Radio Sjuhärad, where he, and among others Janne Josefsson, drew both amusement and irritation with candid interviews with politicians and other policy-makers.

“So sad. A great song-and-dancer and a close friend has passed away,” said journalist Janne Josefsson.

Josefsson and Brandeby worked together at Radio Gothenburg Sjuhärad between 1981 and 1987, presenting the live program Eleventh Hour.

Among the memories from their time there was a call to the former Chilean dictator Augusto Pinochet, and then – at high volume – playing songs by Victor Jara, a dissident poet and singer who was murdered by the Pinochet regime.

“He was incredibly funny and could carry on all night if he was in the mood, such as when I celebrated my 50th,” Josefsson recalled.

Brandeby went on to work at the National Theatre in Gothenburg, and his Kurt Olsson character was adapted for television by Sveriges Television, becoming an instant success.

When interest in Kurt Olsson began to wear off, Brandeby plied his trade in operettas, revues, musicals and farces in a number of Sweden’s favourite theatres together with, among others, Eva Rydberg and Kent Anderson.

In recent years he remained known to a television audience as a (reluctant) member of the cast of Let’s Dance, a popular pro-am dance competition.

In recent years Lars Brandeby suffered from deteriorating health, which resulted in pneumonia and a stroke.