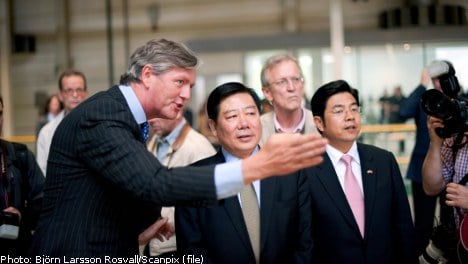 With the Chinese promising to invest more than €2 billion ($2.7 billion) into the ailing car maker, questions were immediately raised on the wider perspective of another household name possibly set to disappear from Sweden.

After all, at what point can a car made in China, owned 100 percent by Chinese companies, but sold under a Swedish brand name, still be considered “Swedish”?

Being foreign-owned is nothing new per se, but does the fact that the new owners of Saab and Volvo are both Chinese affect matters?

“You could say that it matters to General Motors that Volvo is owned by a Chinese firm, it could be less uncomfortable for them now,” says car industry expert Mikael Wickelgren at the University of Gothenburg, to The Local.

“But from a consumer perspective, there should not be much of an impact,” he adds.

Wickelgren argued that “Swedish values” can be maintained irrespective of the nationality of a brand’s owners.

“It should not be any harder for a Chinese company to retain ‘Swedish values’ than for an American company or anywhere else for that matter. The key is what the purchaser of the company, in Saab’s case Youngman and Pang Da, perceive that they are actually buying and how much of a Swedish car they actually wish to keep and exploit.”

”From a purely commercial perspective, the fact that it is a Chinese owner can be very positive. A new, huge, market is now open to them as well as the chance to develop a traditional domestic one,” he argues.

Moldén argued that most consumers care little about where a car is made.

”If you buy an iPhone, you know it is designed in California but made elsewhere and by the same measure, it won’t be any harder for a Chinese company to retain the brand’s Swedish-ness than for an American or anyone else.

“As long as the core values of the new cars are still Scandinavian, that is all that matters… it is largely irrelevant where it was actually put together,” adds Moldén.

The fact that production of cars will continue for the near future, some five years at least, is also key, according to Moldén.

“In the short term, you can certainly still talk of a Swedish car industry,” he says.

“Cars are still being made here, and more importantly, it’s not just production facilities but back-up services, research, the manufacturing of spare parts and other factors that make up the industry as well.”

Volvo’s buy out by Chinese Geely furthermore sets a precedent for Saab to follow.

According to Volvo brand manager Richard Monturo, it is not necessarily important to stress ”Swedish-ness” as much as the values that people associate with the country.

”There is a sense of humanity about Swedes. You have a progressive culture, where you look after other people and put the focus on them. That is how we use the Volvo brand,” Monturo told the Svenska Dagbladet daily.

He underlined that it is more important to focus on the core values on offer in a Volvo – reliability, safety, the environment and the way in which customers are treated.

Industry observers are in agreement that the Swedish connection remains relevant and Saab’s history has been a key factor during the long running talks.

“From the discussions we have had, the Chinese buyers have expressed a deep understanding of the history of our brand and the values,” Gunilla Gustavs, spokesperson at Saab tells The Local.

“They are keen to maintain the reputation we have built up and are well aware that they are buying a premium Swedish brand which they have no intention of changing as far as they have indicated to us.”

Mikael Wickelgren underlines that there are number of examples of car brands with strong national identities falling into foreign hands which continue to thrive, citing Jaguar, Opel and indeed Volvo as examples.

“In the case of Volvo, the brand values have been maintained and sales have not suffered, which indicates that buyers either don’t know, or don’t care that the company is no longer ‘Swedish’,” he says.

He warned however that Saab’s problems could lie elsewhere.

“It is important to ask whether Saab has been negatively affected by the whole process and whether people have lost their faith in the company. That is an issue that needs to be addressed because it can have implications for the brand name and values,” she says.

As has been the case for so long, it is still a question of “wait and see” for all those involved in Saab. After decades of mounting losses, he argues that whether or not the latest twist will be positive is in many ways academic.

“It was completely crucial for Saab. If this hadn’t happened, they would not have been working on the particulars of the Saab future but the Saab bankruptcy right now,” he says.