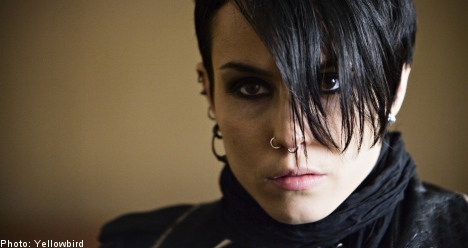 The series was made up of six episodes, directed by Swede Daniel Alfredson and Dane Niels Arden Oplev.

The series is based on author Stieg Larsson’s books about computer hacker Lisbeth Salander, who in the Swedish-language films are played by Noomi Rapace, and journalist Mikael Blomqvist, whose character is played by Michael Nyqvist.

The success of the movies comes on the back of the massive popularity of the trilogy of crime novels which have turned Stieg Larsson into one of the top earning dead celebs, featuring on Forbes magazine list alongside the likes of Michael Jackson and Elvis Presley.

Larsson, who was a writer and journalist, is best known for his Millennium series, and became one of the internationally biggest selling Swedish authors of the 21st century, with tens of millions of copies sold in more than 40 countries.

Larsson campaigned throughout his journalistic career against extremism and racism and was under constant threat from right wing groups.

He died of a heart attack in November 2004, before the publication of “The Girl with the Dragon Tattoo”, “The Girl Who Played with Fire” and “The Girl who Kicked the Hornet’s Nest”.

The Stieg Larsson books have been filmed in Sweden, and a Hollywood adaptation of “The Girl with the Dragon Tattoo,” (Män som hatar kvinnor) starring actors Daniel Craig and Rooney Mara, is due to be released at the end of this year.

The awards are sponsored by the International Academy of Television Arts & Sciences, a membership-based organization comprised of media and entertainment figures from over 50 countries 500 companies from the television industry.