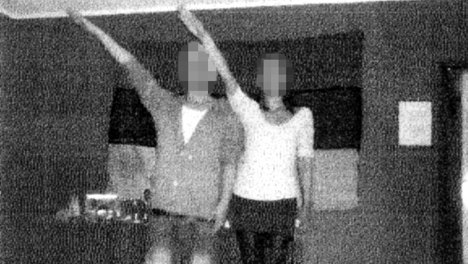 “We were just doing a morning workout,” the 18-year-old woman said when police questioned her, according to local paper Västerbottens Folkblad.

In a picture published on the woman’s personal blog last spring, she, along with another young man, can be seen standing in front of a German flag in a pose which appears to be a Nazi salute

“This is what we do in Norrland,” reads the caption below the picture.

A local police officer came across the picture by chance and recognized the 18-year-old woman.

The blogger was subsequently brought in for questioning by police and has since been charged with hate speech.

Both the blogger and the other young man in the picture were elected members of the governing board of the local branch of the Moderate youth movement (Moderaternas ungdomsförbund – MUF) in Skellefteå in northern Sweden.

Following the incident, both have been forced to leave their assignments with MUF and the local branch of the Moderate Party has also taken pains to distance itself from the two renegade members.

“We have discussed it together and reached the conclusion that they are leaving us,” Andreas Löwenhöök, chair of the Skellefteå Moderates, told the newspaper.

As soon as Löwenhöök had been informed about the incident, he contacted the youth branch in the area and asked them to deal with it.

According to Emil Marklund, head of MUF in Skellefteå, the movement spoke to the two members in the wake of the hate speech charges and said that the woman is willing to leave the organization.

“She has said herself that she wants to leave her assignment,” Marklund told the paper.

Speaking with the Aftonbladet newspaper, secretary general of MUF Gustav Schyllert didn’t want to comment on the woman’s claim that she and her fellow MUF member struck the pose as a part of a morning exercise routine.

“I can just say that they are leaving MUF and that this is a good thing,” Schyllert told Aftonbladet.

The 18-year-old woman apologized for the incident in a blog post published in May.

“I don’t have any racist views at all and if someone got the impression I did, I apologize, because that’s absolutely not the case,” she wrote at the time.

In the wake of the scandal, she wrote in a subsequent blog post that she doesn’t have anything against Jews, isn’t xenophobic and that she “has foreign friends from all corners of the world”, before taking aim at the Swedish media for drawing attention to her ties to the Moderate Party.

“And it’s wildly immature to use this incident, something two drunk teenagers did to have a go, to sully an entire party and benefit their own aims,” she wrote.

“I judge people, not by the colour of their skin, but by their actions. But in this country, you’re a racist no matter what you do.”