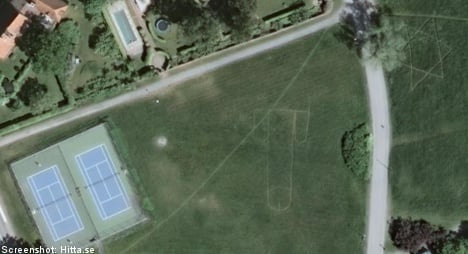 “It may be distasteful, but it’s not illegal,” Nicholas Rundbom, a spokesperson for Hitta.se, the Swedish directory and map website which published the phallus-filled aerial photograph, told The Local.

The picture came to Rundom’s attention when he was contacted by a reporter with business news website Realtid.se who was writing a story about a posh villa belonging to Swedish business icon Per-Olof Söderberg.

Söderberg, founder of the Söderberg & Partners insurance brokerage and board member of the Ratos private equity firm founded by his grandfather in 1933, had put his home up for sale, prompting the news website to take a closer look at the property using Hitta.se

Much to the surprise of the journalist, the grounds near Söderberg’s home featured a symbol in the shape of a massive penis, as well as a star, mowed in the grass.

Söderberg, whose home is adjacent to the tennis-court-sized penis, was also clueless about the sex-themed shape in the grass surrounding his compound.

“I didn’t know anything about it,” Söderberg told the Expressen newspaper in reference to the newly-discovered phallus.

Following the report, technicians with Hitta.se contacted Metria, the company that supplied the images, to verify that the image, which was taken on April 18th of this year, had not been doctored.

“All six experts said it was clearly real grass and they all used the word ‘boyish prank’,” Metria spokesperson Johanna Ahlmark told Realtid.se.

“Someone was clearly having fun when mowing the lawn.”

Rundom from Hitta.se marveled at the coincidence that has resulted in the penis-prank being given a long-lasting afterlife on the internet.

“It’s highly improbable that those who came up with this creative stunt and cut the grass in that way did so just before a satellite flew overhead and snapped a picture,” he told The Local.

According to Rundom, Hitta.se has never received a similar report.

While the company hasn’t received any complaints about the oversized sex organ, Rundom added that Hitta.se was prepared to make changes to the image if necessary.

When contacted by The Local, a spokesperson for Danderyd municipality, in which the Djursholm district lies, said he wasn’t aware of the penis prank.

“This is the first I’ve heard of it,” he said, although he confirmed that the municipality does have responsibility for maintaining public parks and grounds, something which is usually done by a contracted landscaping firm.