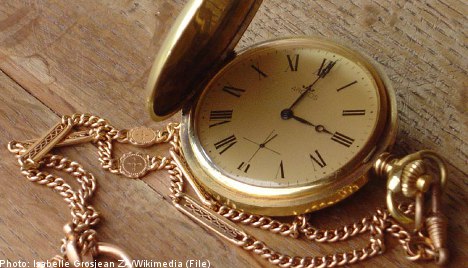 ”Imagine that you are listening to a song with the notes ‘do re mi’ at the beginning, if it continues for another minute, you can’t hear all of the music at the same time. It is only a short sequence that you can hear in one go. Every such experience is always two seconds long,” researcher Jan Almäng told The Local.

And that moment; that experience, is defined as a ”now”, according to Almäng.

It is impossible to actually measure the moment “now”, while in a physical sense, ”now” has no duration, but there is another type of ”now”; the so called ”lived” or ”experienced now”.

And that is generally said to last for two seconds. While this is not Almäng’s invention, he has done extensive research into how the moment is built up.

“Even within the sequence ‘do re mi’, there is a perception of time. When I hear ‘mi’, it is as the present, with ‘re’ as the past and ‘do’ as even further away,” he told The Local.

In order to further demonstrate the ”experienced now” Almäng retells a story of an accident a few years back, when he collided with an elk on the motorway, an incident which he remembers as a series of related moments.

First the driver called out, then he saw the animal on the road, then he heard the bump as they crashed, and lastly he saw two or three other animals pass by behind the vehicle. This series is a collection of remembered moments, of experienced nows.

”When I replay this to myself it may take ten to fifteen seconds, but in every given moment of the memory I only experience one to two seconds of the whole,” Almäng said in a statement.

It is the same when we recall an incident from our past.

And according to researchers of the human brain, the same brain cells are activated when we experience something first hand as when we replay the memories in our heads, just like a simulation. All these simulations are built up by several ”now” relived.

But although there is a two-second limit to an experienced ”now”, Almäng thinks that there are no limits to how long it is possible for a person to live for the moment, to live in the ”now”.

”All through one’s life, I’d say. We are always living in the ‘now’. But at the same time, we always have a past and a present to relate to,” he told newspaper Metro.