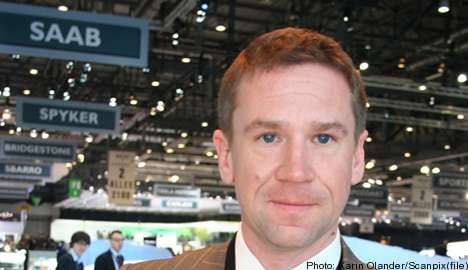 “As far as I know, both Antonov and Baranauskas were detained,” Lithuanian Interior Minister Raimundas Palaitis was quoted as saying by Baltic news agency BNS, reported news agency Reuters.

Officials said on Wednesday that the money allegedly embezzled from the bank was intended to buy a stake in the cash-strapped Swedish automaker.

The head of the bank, Ivars Prieditis was arrested on Wednesday on suspicion of plundering its reserves.

Krajbanka is a subsidiary of Vladimir Antonov’s Snoras Bank, which was taken over last week by Lithuanian authorities after suspicions emerged of accounting irregularities.

According to his own information, he has provided loans of at least 800 million kronor ($116 million) to Saab CEO Victor Muller’s company, a major shareholder in Saab’s parent company Swedish Automobile (SWAN).

It remains unclear if either Snoras or Krajbanka provided any of the funds for the investment.

However, Antonov’s links to Saab, Spyker and Victor Muller have long been controversial.

The European Investment Bank (EIB) in July confirmed a loan to Saab, on the condition that Antonov was kept out of the firm and there have also been reports that GM blocked the Russian financier’s involvement.

In April this year, the Swedish National Debt Office (Riksgälden) however made the decision that that there were no grounds to prevent Antonov from becoming a Spyker shareholder.

However, neither the prosecutor’s office in London or police in Lithuania were able to confirm that it is indeed Antonov and Baranuskas that are being held.

The London police confirmed that two men had been detained under a Europe-wide arrest warrant, but declined to give their names.