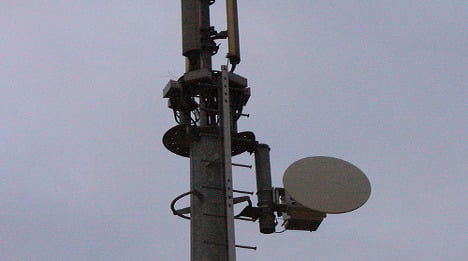 The Local reported last week about a local man, known to don a silver-coloured suit to protect himself from mobile phone mast radiation, who had demanded that the town create a “radiation-free zone” in his garden.

While municipal officials initially indicated a readiness to meet the man’s demands, experts were quick to warn that the move may leave half the county without mobile phone coverage.

The environmental office in Mora-Orsa had been keen to force mobile operators to shift the direction of their masts, but municipal officials have now put their foot down and called a halt to the plans.

“The municipality is not going to take any measures in this matter,” said Bengt-Åke Rehn at Mora municipality to the Expressen daily.

62-year-old Dan Bengtsson, who lives outside of Mora, has long complained of headaches, back problems, and painful prickles in his heart and believes that mobile and TV mast radition is to blame, despite the lack of scientific evidence.

Bengtsson describes himself as “electro-oversensitive” and claims that his health has deteriorated since the mobile mast network was expanded in the area.

The silver suit he sometimes wears dampens the effect somewhat, but not completely, according to Bengtsson.

”It looks a little bit like a space suit,” Bengtsson told the Aftonbladet daily last week.

Bengtsson’s problems began in 1992 when he lived on the west coast and worked as an electrical engineer for a power company.

In 2005 he moved with his wife to the little village Venjan in Mora municipality in Dalarna, to escape the electricity and radiation.

“But I still have not managed to find a decent home. Mobile phone radiation is unavoidable. It is everywhere in Sweden,” he said.

According to experts in the field, there is however no scientific proof that mast radiation is harmful to humans.

”The decision which the municipality is about to take is not based on any scientific evidence. There is no known biological mechanism for how a low level of exposure emitted by mobile base stations could have any detrimental health effects,” Maria Feychting, epidemiology professor at the Karolinska Institute in Stockholm, told the Dagens Nyheter daily on Friday.