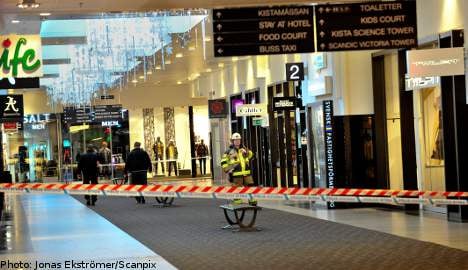 Police bomb technicians were able to load the suspicious object onto a bomb truck at around 1pm on Monday in order to transport it to a safe location for examination.

The suspected bomb was found in a stairwell, through which the robbers had fled, and the police decided to seal off the mall, calling in bomb technicians.

It remained unclear on Monday afternoon whether the object was dangerous, but at around 2pm shoppers were permitted to return to the shopping centre.

According to the Stockholm police, there is “very good witness information” concerning the robbers, who remained on the loose at 4pm on Monday afternoon.

The police also said that they plan to study images from surveillance cameras to assist in the identification of the gang.

Police were unable to specify the nature of the weapons used in the robbery.

“I can’t say for sure. There is talk about a pistol and a rifle of some kind, but whether they were genuine or not we don’t know.”

According to reports from the scene, hundreds of people gathered outside the popular mall in central Kista during lunchtime – both customers and employees of the many restaurants and stores.

Witness reports indicate that there were between two and four robbers, who were armed and masked. The gang made off with loot from one of the jewellery stores in the mall.

Police received an alarm call at around 10.19am on Monday, with no one is reported to have sustained any physical injuries.