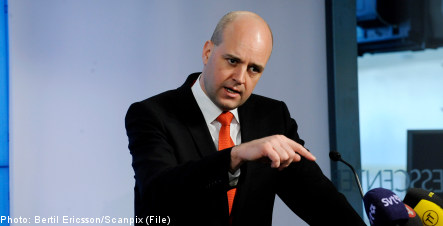 “MPs function mostly like extras, as something pretty to show off when democracy needs a face,” wrote former MP Anne-Marie Pålsson in her new book “Knapptryckarkompaniet” (“The button-pressing brigade”).

According to Pålsson, there is no space within the party for independent-thinking MPs.

“Especially not when representing a government power, then that shrinks down to next to nothing,” she told news agency TT.

The image of the Moderate party leader, current prime minister Fredrik Reinfeldt, is hardly flattering either.

Reinfeldt, largely perceived in Sweden as calm and listening, is portrayed as double natured; cool and collected on one hand and ruthless on the other.

“It is practically Machiavellian,” Pålsson said to TT.

In the book she describes one instance when the Moderate Riksdag MPs questioned the party line regarding the controversial signals intelligence law, the so called FRA-law, from 2009.

“What do you think you are? Some sort of referral authority? Who gets to think what you want? You are here to carry out party policy and that is all,” Pålsson quotes Reinfeldt as saying to his MPs.

Reinfeldt, who has so far chosen not to comment on the book, learnt his hard line by predecessor and current foreign minister Carl Bildt, according to Pålsson.

“He has himself described how, as a young man, he was reprimanded by Carl Bildt. He knows what it is like and has learnt it from Carl Bildt,” she told TT.

Anne–Marie Pålsson was a Moderate Riksdag MP between 2002 and 2010.