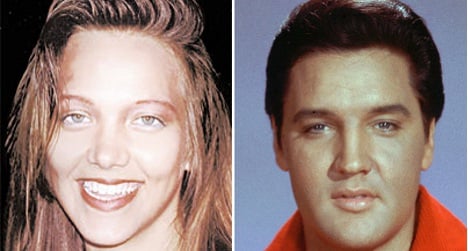 Lisa Johansen is claiming the money as compensation for alleged defamation and infliction of emotional distress, according to a report in Rolling Stone magazine.

Johansen, who was at the time living in a Stockholm suburb with her two children, claimed in a 1998 memoir entitled “I, Lisa Marie: The True Story of Elvis Presley’s Real Daughter” that she was the daughter of the artist and Priscilla Presley.

Johansen claimed that she had been the victim of identity theft and the book caused a storm of interest, leading to the world’s media hounding Priscilla Presley and Lisa Marie, who was at the time married to Michael Jackson.

But interest cooled quickly after Johansen refused to take a DNA test, a decision which led to her being sued by her publisher for $50 million. Johansen now claims that she submitted to a test in London last year, according to documents submitted in her lawsuit.

In an interview with the Swedish Aftonbladet daily in 1999, Johansen claimed that she had arrived in Gothenburg as a nine-year-old and grew up in Upplands-Väsby, north of Stockholm.

Johansen argues in her writ, filed this week with Tennessee federal court, that Lisa Marie Presley stole her identity to prevent her from getting her inheritance after Elvis Presley, who died in 1977.

She has claimed that Priscilla Presley left her in Sweden in 1979 for “security reasons” and was due to stay in Sweden until she was 25-years-old, according to Aftonbladet.

After the initial interest around the publication of her book, the story fell out of the media spotlight, but Lisa Johansen has continued to maintain her version of events, claiming that she has been subjected to harassment by the Presley family.