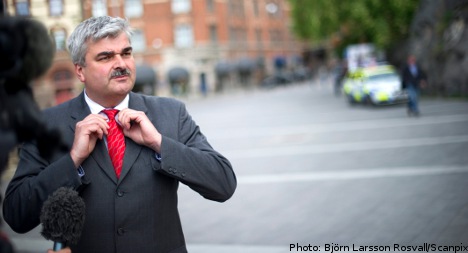 “This is a damn joke,” said Rosengren to daily Expressen when asked to comment about his statement.

According to the paper, two journalism students were interviewing Rosengren about something else when he allegedly made the unfortunate remark.

When they subsequently revealed that the tape was still going, Rosengren said he would deny the statement.

“I will say I was only making a joke,” Rosengren reportedly answered.

In the interview, the paper claims that Rosengren intimated he had discussed the future of the party leadership with party colleagues Thomas Östros and Sven-Erik Österberg during the week and that they all agreed that Håkan Juholt must go.

Both former ministers Östros and Österberg have recently chosen not to answer whether they have confidence in their party leader. Instead they have said that they have faith in the party’s executive committee (verkställande utskott – VU).

On Thursday Österberg said that he had been misinterpreted.

“I am so tired of al the speculation,” he said, adding that he is a member of the executive committee that took the decision to support Juholt.

In the wake of a scandal about Juholt’s use of his housing allowance and internal squabbles about the shadow budget tarnishing the start of the political year, the embattled Juholt has had a tough start to the autumn.

Poll after poll has shown dwindling support for the party, which for most of the past seven decades has been Sweden’s largest.

Joke or no joke, the Social Democrat party leader said in a radio interview on Friday morning that he did not see the funny side:

“You can place the bar for what is humour wherever you want. I don’t find it funny,” he told Sveriges radio (SR).