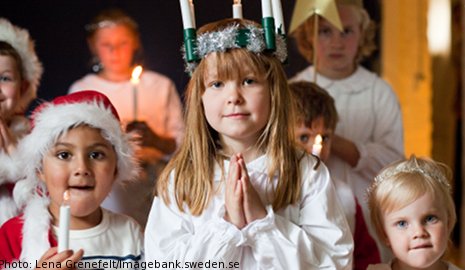 The parents were informed by staff earlier in the year that strict new rules about taking photos of children would be enforced, in order to prevent youngsters’ pictures from ending up on Facebook and other social media websites.

A prime concern behind the move is said to be to prevent the children of asylum seekers with protected identities unwittingly being uncovered by such photos.

As a result of the new rules introduced in the municipality earlier in the year, parents have been told they cannot take pictures at the numerous Lucia celebrations, although as a compromise at a handful of schools, staff members will be given permission either to take the photos themselves, or let parents take photos just of their own children.

When the ruling was first announced, Jenny Björkholm, lawyer for Linköping’s municipality, said that anyone who wants to take a picture of someone else’s child, and publish it, must first obtain consent from the relevant parents prior to publication.

Despite the fact that the annual celebration is one of the highlights of the year for young children and their families, most parents have shown their understanding, according to the head of pre-schools, Zoia Fabres.

“Parents are in favour of it. No one has phoned me with comments and I have not heard that any staff have received any comments either,” she told local newspaper Östgöta Correspondenten.

Lucia is the celebration of light in the midst of darkness, celebrated by Swedes on December 13th, when children don white robes and sing traditional christmas songs, at practically every school and pre-school countrywide.