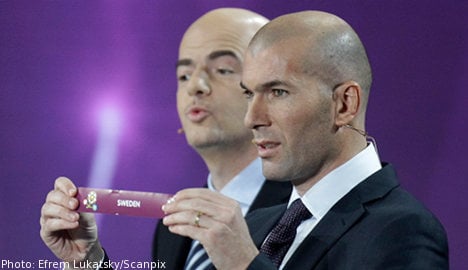 Former French player Zinedine Zidane holds the lot of Sweden at the draw.

The draw means that Sweden will feel confident of their chances of making it through to the knockout phase.

Manager Erik Hamrén and several of the Swedish players had said before the draw, which was held on Friday evening, that they were hoping to be in the same group as the English.

Sebastian Larsson who plays for premier league team Sunderland had also expressed a hope for such a draw and will have special reason to look forward to the clash in Kiev on June 15th.

The group will certainly be considered favourable for all four teams.

Although Ukraine, as one of the hosts will pose a threat, there is no doubt that it was one of the preferred options from the first pot, while France are still in a rebuilding phase after a disastrous World Cup in 2010.

The draw will also give Sweden a chance for revenge after England beat them 1-0 at Wembley in November.

It was the first time in over 40 years that the Swedes had succumbed to England.

The same team have also been confirmed as guest opposition in the first match to be played at the new national stadium in Solna, Stockholm next November.

Elsewhere in the draw, Sweden’s Scandinavian neighbours Denmark will face the daunting prospect of Germany and the Netherlands, two of the likely favourites, as well as Portugal in group B, while world champions Spain are set to meet Croatia, the Republic of Ireland and Italy in group C.

Co-hosts Poland will face Greece, Russia and Czech Republic in Group A.

The tournament kicks off on June 8th, when Poland will take on champions from 2004, Greece, at the National Stadium in Warsaw, with the final game played at Kiev’s Olympic Stadium on July 1st.