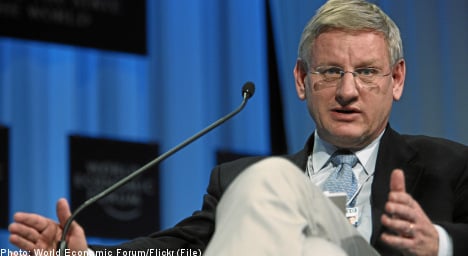 The decision has come in for some heavy criticism from several players.

“Sweden has long had a very good reputation when it comes to human rights, but the current government is undermining this in one issue after another,” said MP Bodil Ceballos of the Green Party (Miljöpartiet) to newspaper Dagens Nyheter.

On Thursday evening EU’s foreign ministers agreed to impose sanctions against Syria, which apply to 11 companies whose technology can be used to track and supervise regime critics.

Several EU diplomats told SVT that Sweden’s actions could be traced to the “Ericsson factor”, in other words that Swedish Ericsson is supplying Syria with technology that enables tracking of the regime’s opposition through mobile phones.

According to Sweden’s foreign minister Carl Bildt, however, Sweden’s decision is in fact an attempt to aid the opposition.

“In the case of Syria, mobile phones and their cameras are one of the opposition’s strongest weapons,” he wrote on his blog on Friday.

“Without them we wouldn’t find out very much about the brutal violence used by the regime,” wrote Bildt.