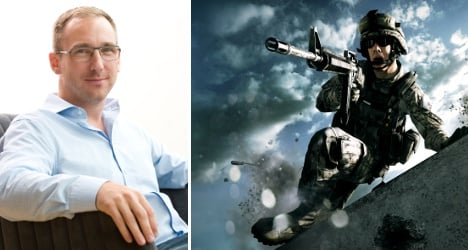 News that sales of the computer war game Battlefield 3 reached over five million copies in its first week of release in October was the latest evidence of the export success of Swedish-developed computer and video games.

Indeed, the exports of games developed in Sweden continue to grow. According to figures published in September by the Swedish Games Industry (Dataspelbranschen), a trade association representing game developers, publishers, and distributors, Swedish game developers reported their highest sales figures ever in 2010, up 22 percent on the previous year.

The phenomenal success of the Battlefield franchise underlines not only the mind boggling popularity of the game, but the growing reputation enjoyed by Sweden in the computer game industry, and more specifically by its developer Digital Illusions CE (DICE).

Like so many other players in its field, the roots of Battlefield can be traced back to a university dorm room, in this case in Växsjö, Småland in south central Sweden.

Back in the early 1990s, Andreas Axelsson, Frederick Lilie Branch, Olof Gustafsson and Ulf Mandorff formed a development company specializing predominantly in pinball-style games on the PC and the newly launched consoles at the time.

They subsequently started to dabble in the growing war games area, and in 2002, the release of Battlefield 1942 changed the course of the company’s and arguably an entire industry’s history.

Battlefield, a PC only game, which broke the mould in multi-player, First Player Shooter (FPS) games of the time, introduced concepts such as large open environments, team play, all-out warfare and vehicles to the world of online gaming.

It quickly gathered a dedicated group of followers and the momentum has grown ever since.

Not surprisingly, such success was bound to attract the attention of big business, so it was little surprise to see DICE acquired by global giant Electronic Arts (EA) in 2006.

This allowed the company to develop the franchise with greater investment and more marketing muscle behind it giving subsequent Battlefield releases the chance to move through various settings such as the Second World War to the modern day as well as a science-fiction future.

Meanwhile, as a further sign of its popularity, Battlefield broke away from being a PC only game onto the crucial Xbox 360 and Playstation 3 platforms, giving it greater potential for creative and commercial growth.

DICE’s success on the global stage prompted questions that the company may consider moving to the US, but so far CEO Karl Magnus Troedsson has resisted all thoughts of moving the operation abroad, instead concentrating its expanded offices in Slussen.

In doing so, DICE has followed the footsteps of many entrepreneurs and successful Swedish companies, particularly in the hi-tech branch, who have sold to larger international owners, but kept a base at home.

“DICE is a very Swedish company, not just due to location, but also in our culture, development processes and way of structuring within the company,” Troedsson tells The Local.

“We’re a consensus-driven company where the best ideas win, not the person with the longest and fanciest title. People are respectful, yet bluntly honest, regardless of their pay grade, something which sometimes has come as a bit of a surprise to people from other company cultures, where hierarchy is overly important.”

As for keeping the ”Swedish-ness” of the company and the brand, Troedsson is adamant that DICE has found the right balance.

“Being Swedish isn’t very important to our game brands, such as Battlefield or Mirror’s Edge, when they’re launched to a global mass market. However, it’s a different story with our company brand,” he explains.

“We find that lot of people come here (17 percent of our employees are non-Swedes) to try it ‘for a year or two’ and stay indefinitely after falling in love with Sweden (or a Swede), the culture, or maybe Swedish midsummer celebrations. We’re proud of who we are, where we are and what that implies.”

Mirroring in many ways the music songwriting and production field, computer game development is an area where Swedes excel and have achieved a great deal of success in recent years.

“There are a couple of reasons for this,” says Troedsson.

“Sweden was very early with state subsidised so-called ‘home computers’, encouraging companies to place computers in the homes of their employees. Maybe not so many of those people actually used them, but their kids sure did.

“We are generations of kids who grew up with free access to hardware, which was complemented later on with a very high penetration of fast broadband.

“At the same time we have a lot of people interested in becoming engineers and software engineers – and our higher education facilities in that field are very good. Plus Sweden has lots of creative people in music, art and other forms of entertainment. In my book, these are some of the important reasons why the Stockholm-Uppsala region today is the second largest hub of game developers in Europe, after London. And we’re just getting started!”

Having just given his mother company its biggest success yet, Troedsson and his colleagues at DICE have certainly done their part to secure the future of the gaming development field in Sweden for the foreseeable future.