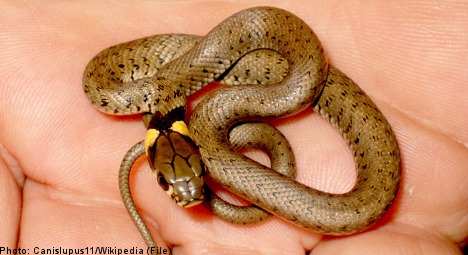 ”I grabbed hold of it, thinking it was some sort of toy. But then I realized it was real,” said Dagmar from Finspång, in south eastern Sweden to local paper Norrköpingstidningen.

The ornament had been purchased at the local branch of Swedish hardware chain Clas Ohlsson and the Santa had been packaged in a big box with a red bow tied firmly around it, according to the paper.

A week later, Dagmar invited a friend over to admire her Santa, which she had given pride of place on the kitchen window ledge, next to a Christmas flower.

But as they were looking at it, the ornament started moving, and suddenly a snake peered out.

By then the Santa had been in Dagmar’s flat for about a week without the stowaway serpent stirring once.

A great commotion ensued, according to the paper, ending with some neighbours managing to coax the sneaky snake outside.

Biologist Lars-Åke Janzon from the Natural History Museum in Stockhom thinks that the unidentified serpent is a completely harmless grass snake.

”I am not surprised that one has been found this way, it is more common than you’d think,”Janzon told news agency TT.

However, the question bugging Dagmar is how on earth the stealthy serpent got into her Santa’s sack. She remained adamant it couldn’t have snuck in any other way.

”It is a real mystery,” she told the paper.