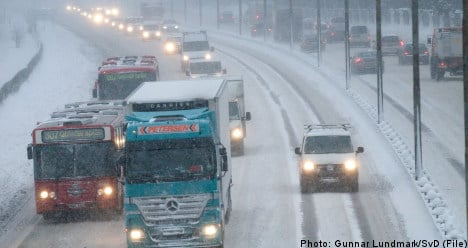 Swedish weather agency SMHI has issued class 2 warnings for Gävleborg and Västernorrland in eastern and northern Sweden, which are expected to be worst hit by a storm expected to dump more than 20 centimetres of snow in some areas.

“It is important to take extra care on the roads since there is a great risk of traffic problems. There could be complications with power and telephone lines as well”, SMHI meteorologist Alexandra Ohlsson told the TT news agency.

“People should be prepared for power outages.”

The Swedish Transport Agency (Trafikverket) has also issued warnings, predicting disruptions to rail traffic in particular and urging the public to keep an eye on updates from various rail operators ahead of any planned travel.

Heavy snow forecast for Gävleborg and Västernorrland, combination with gusty winds may cause severe drifting, especially along the coast.

SMHI has also issued a class 2 warning for coastal areas in both northeastern and southwestern Sweden due to the high seas expected to accompany the storm.

Wind gusts of up to 86 kilometres an hour are also expected to lash Skåne, Halland, Blekinge and Öland in the south, according to SMHI.

Friday’s winter weather may leave much of the country reeling and SMHI predicts that snow will continue to fall in many areas on Saturday before conditions beging to clear on Sunday.