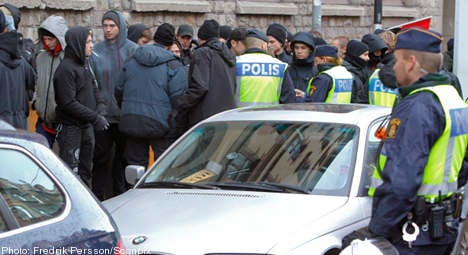 Chants and slogans could be heard as the right wing protesters were escorted outside the riot fence at Mynttorget. Police scattered one of the counter protest droves where groups such as Brittans damgympa and Aktion mot deportation participated.

Eggs, bottles and firecrackers come flying through the air as hundreds of counter protesters have come to interrupt the right wing protests.

The atmosphere is very tense, news agency TT reported, and aside from the yelling and chanting, at least one boom has gone off.

According to police the boom came from Riksbron, but was caused by some form of firework, and nobody was harmed.

Police are doing their best to avoid direct confrontation between the two forces, but have allowed the counter protesters to stay temporarily at the Mynttorget before dismissing them.

“We might need to move them if they don’t go voluntarily, but that’s usually not necessary,” police spokesperson Anders Gillander told TT.

Hundreds of counter protesters are gathered outside the Riksdag next to Mynttorget, and police have formed a human wall to control the crowd.

The first dozen right wing extremists marched right through the masses of counter protesters and were faced with chantings and pushes, which they responded to by yelling their own chants. About thirty police officers rushed to the site to avert fights.

The anti nazi network “Vi är 94 pro cent” (Literally: We are 94 percent) gathered hundreds of followers in Kungsträdgården in central Stockholm. The arrangers have held speeches and musicians have performed from a trailer.

Some are masked, but a majority are not. The crowd is under control, and a large number of police officers are following the march.