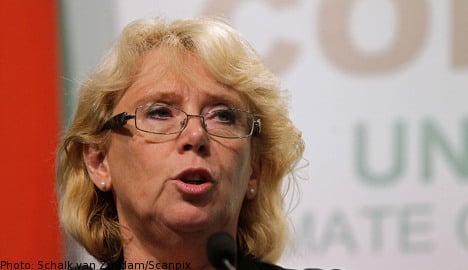 “Just wonderful, I never dared to hope for this,” Ek told the Svenska Dagbladet daily.

“It was complicated to get all 194 countries onboard this plan.”

However, despite Ek’s response to the deal and the fact that India, China and the US have agreed on the new terms, there is still skepticism as to whether it is good enough.

Svante Axelsson at the Swedish Society for Nature Conservation (Naturskyddsföreningen) feels the new terms are a victory for the climate negotiations, although not for the climate itself.

He argues there’s still a lack of concrete decisions to stop global warming, adding that the gain from this conference is foremost that they found new ways to cooperate, which can result to valuable content.

And just as expected, the agreements didn’t come without a fight.

The European Union initially presented the new terms, which caused strong objections among the US, Indian and Chinese representatives. Also Brazil and South Africa were strongly opposed to the suggestions.

“This shows that a united EU can accomplish results. It means so incredibly much,” Ek told news agency TT.

On Sunday morning, four platforms for the continuous climate efforts were decided upon, also including an extension of the Kyoto protocol.

Ek admitted there were both pros and cons with the the conference, but the overall result, she said, was satisfying. She further explained a committee will now be formed to develop new suggestions for climate agreements in 2015, which shall take full effect by 2020.

But to wait eight years for things to happen is far to slow, Åsa Romson with the Green Party commented on Sunday.

“The decisions in Durban are small steps in the right direction, but at the same time completely insufficient to reach the two degree target. For that to be possible, the global emissions have to be reduced sooner than 2020,” Romson said.

Before the long night session was over, the representatives of India and China accused the EU for using threats to get their will through. However, later that night they both accepted the new terms.

“We’re doing this in the spirit of flexibility,” said the Indian negotiator Jayanthi Natarajan.

The last decision was made at 5am on Sunday morning after heated debates and a sleepless nigh in Durban, South Africa.