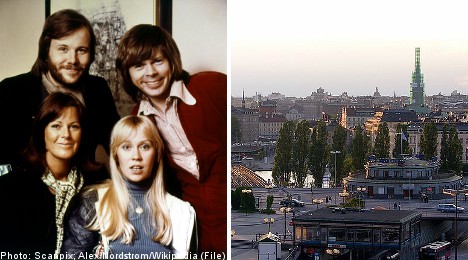 This weekend, former band member Benny Andersson revealed that he’d be willing to reunite the group to save a beloved – albeit urine soaked – Stockholm landmark.

”If I knew with 100 percent certainty that it would help, I would call the others and ask if we could do a gig. I’d try at least,” said a half-serious Benny to daily Svenska Dagbladet (SvD) on Saturday.

The comments come in reference to Andersson’s concern about the future of Slussen, (literally translated as the Locks), a central area of Stockholm named after the locks between Lake Mälaren and the Baltic Sea that dates from 1935.

The area has had a lot of attention in recent years. Plans for a major redevelopment of the area made city leaders deem many of the original design features redundant or unserviceable due to physical deterioration.

In 2009, the city of Stockholm announced a new design featuring two linked pedestrian bridges and one for automobile traffic.

The new design would remove many of the existing roads and create several new blocks of buildings close to the waterfront.

However, from the very introduction of the new plans there has been massive resistance to the proposal, the winner of a 2009 competition to design a plan for the area.

The former Abba star got involved when the head of the Bevara Slussen organization (Save Slussen), Karin Schmidt, contacted him asking for help.

And after hearing experts at the Royal Swedish Academy of Fine Arts explain exactly what the proposal entails, he was upset and decided to do something.

”I have had a lot of positive response even if someone thought I ought to stick to the accordion,” he told SvD.

In order to save the area from what Andersson believes to be a mistake, he would even reunite Abba if he thought it could be of help.

”Slussen is that important. But there is not much time, we’d need at least one day’s rehearsing,” Benny Andersson told SvD on Saturday.

On Monday, the day of the fateful decision, Andersson was one of many Swedish celebrities on hand at City Hall to entreat deputy mayor for culture, Madeleine Sjöstedt, to rethink the proposal.

However, Sjöstedt wasn’t to be swayed by Andersson and the others. She said she will vote yes when the decision is taken later in the day.

“I think it will be good,” said Sjöstedt, who added that it wouldn’t be fair on all the people that have been working on the proposal for all these years to scrap it at the last minute.

But according to Andersson, many Stockholmers are unaware of exactly what the new proposal entails.

“Stockholmers should have their say in a referendum,” Andersson said to Dagens Nyheter (DN) on Monday.