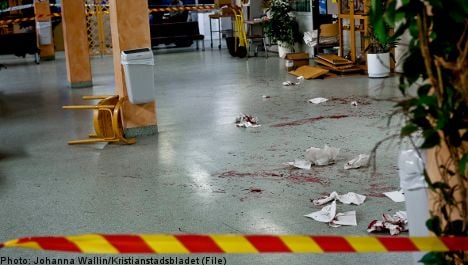 Another 19-year-old man was arrested on Monday afternoon suspected of attempted murder for the stabbing, which took place at Österänggymnasiet in Kristianstad.

Later in the day, a 40-year-old man was also arrested on suspicion of being an accomplice to attempted murder.

The 19-year-old victim is in serious condition, but his wounds aren’t considered to be life threatening.

“He is seriously injured but is able to speak, from what I understand,” Skåne police spokesperson Calle Persson told the TT news agency.

Police arrived at the school shortly after 2pm following a call about a fight. Upon arrival, they found the injured 19-year-old victim.

The fight broke out adjacent to the school’s maintenance office in an area that served as a makeshift student lounge.

“There were a lot of students present when the perpetrator came up from behind and stabbed the 19-year-old in the back or neck,” student assistant Hany Isleem told the Dagens Nyheter (DN) newspaper.

Police interrogated a number of witnesses on Monday afternoon and were able to arrest the perpetrator within hours of the attack.

But the mood at the school remained subdued following the incident.

“The students are sad and upset,” principal Jenny Comstedt told the Expressen newspaper.

“They’ve been seen to by the school nurse and other staff. We’ve acted in line with the school’s emergency plan and made sure that there is someone to take care of them when they get home.”

It remains unclear what sparked the fight.

He was seriously injured and remained sedated for a day following the attack.