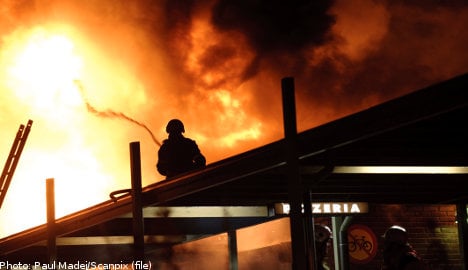 If found guilty they may be forced to pay damages of 33 million kronor ($4.8 million).

”It wasn’t so much a criminal network as a local gang of guys,” said prosecutor Johan Henningsson.

Ten teenagers, all between the ages of 15 and 18, have been charged in connection with a fire that gutted the Berga Centrum shopping mall near Kalmar on October 12th.

According to Ulf Einarsson of the local police, tips from the public led investigators to the four suspects.

“We’ve received many tips, and their names occurred repeatedly among the names mentioned,” he said to news agency TT at the time of the teens’ arrest.

The four boys all live in Kalmar, but are not from the Berga neighbourhood.

The four main suspects had had previous contact with the police, Einarsson told local newspaper Barometern.

It is these four who initially told police about the “test”.

They claim that they had to start a fire to gain acceptance of the other group of teenagers, known as the “Berga centre gang”.

The six other teens deny all allegations, however.

But according to the prosecutor, the instigators had showed the four a dumpster at the back of the centre, and told them to set that alight.

The fire later spread along the wall and the entire building burnt down.

16 companies are plaintiffs in the case with claims against the perpetrators that amount to 33 million kronor.