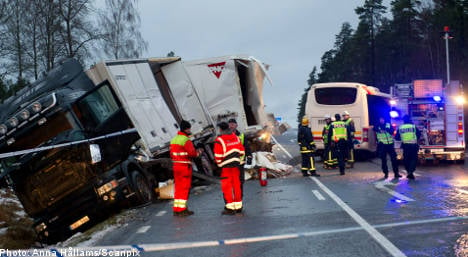 A man and a woman were killed when the bus and truck rammed into one another at 6.30am on route 26/47, a few kilometres southeast of Mullsjö, outside of Jönköping.

One victim died on the scene, while the second person died later at Ryhov hospital in Jönköping.

Three other people are being treated at the hospital for minor injuries.

A total of 19 people were involved in the crash. Those that didn’t need emergency care were taken to a clinic in Mullsjö.

Several people were trapped in the bus after it rammed into the truck.

“We came up across a bus, where there were people injured and trapped inside. There were several people standing outside the bus with minor injuries or no injuries,” Fredric Jonsson of emergency services told Sveriges Radio (SR).

Police are still investigating the cause of the wreck.

“Right now we don’t know what caused it. But we’ve been in contact with the Swedish Tranport Administration (Trafikverket), which carried out an investigation for accidents as serious as this one,” police spokesperson Gunnar Hansson told the Aftonbladet newspaper.

Route 26/47 remains closed in both directions as crews were to clear the scene of the accident.