“They are one of us,” Sten-Ove Danielsson, a Social Democratic member of the local council in Ånge in north central Sweden, told the Aftonbladet newspaper.

Danielsson’s comments refer to the Danielian/Arustamjan family, who came to Sweden from Armenia in 2000 and had lived in the community for the last ten years.

But in the early hours of Tuesday morning, border police arrived at the family’s home and whisked the parents and their three teenage sons away.

The family was on a plane back to Armenia before noon, leaving friends of the sons, aged 13, 15, and 17, in tears as they waited in vain for the boys to turn up at the local school’s Lucia Day celebrations.

“Every youngster is sitting and crying down at the school,” teacher Berit Holm told the newspaper.

Fellow teacher Krister Gunnar, who once had one of the family’s sons as a student, was taken aback by the emotional outburst that swept across the school community when he turned up to watch the Lucia Day procession.

“I was greeted by weeping children. Everyone was in tears – children and adults – everyone. Even the cleaners were sobbing,” he said.

Elise Gulliksson, 14, is friends with two of the boys and spoke with them before they were taken away.

“We couldn’t talk too long because the police were there. They said they missed us and hoped they’d be able to come back,” she told Aftonbladet.

Gulliksson had a hard time accepting that her friends and their family had been kicked out of the country.

“It think its ridiculous. I don’t know how they can do this. I’ve been crying for hours.”

But the Danielian/Arustamjan family have had a deportation order hanging over their heads since 2008, having twice had their applications for residency in Sweden rejected.

According to police, the operation to carry out the deportation took place without incident.

“Police knocked on their door early in the morning and helped them pack their bags,” police spokesperson Annica Odelind told the newspaper.

She also confirmed that the family had no idea that Lucia Day 2011 would be their last day in Sweden.

“They didn’t know. All they knew is that they weren’t supposed to still be in the country; that they were in country illegally,” said Odelind.

Before the plane took off for Armenia, 13-year-ol Valerik managed to send a text message to one of his friends:

“We’ve been deported to Armenia :(”

Following the surprise deportation, more than one hundred members of the community of roughly 3,000 people gathered in a town square on Tuesday afternoon to protest the move.

“Save the family, let them come back for Christmas,” the crowd chanted.

Family friend Gunilla Orsén told the paper that residents of Ånge who knew the family considered them to be nice and helpful people.

“Their foremost wish was to blend into Swedish society and be accepted,” she told the paper.

Local council member Danielsson has said he plans to look into finding ways to bring the Danielian/Arustamjan family back to Sweden as labour migrants.

DEPORTATION
Why is Sweden’s 2021 migration law leading to ‘teen deportations’? 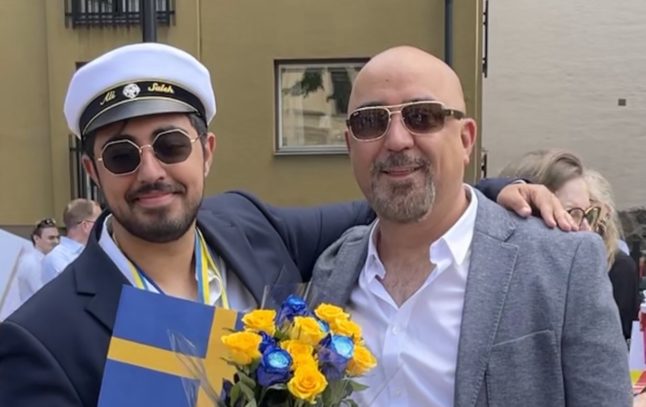 DEPORTATION
‘Swedish migration does not care that my son has never been to Iran’
Url copied to clipboard!