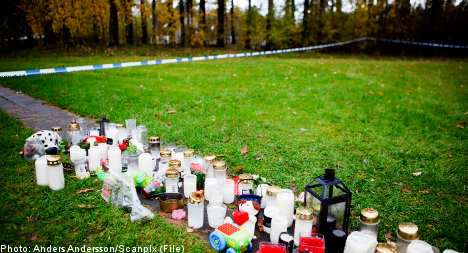 “The boy has told us what he did and how he did it and there is a confession in that,” said head of information at the Kronoberg county police, Robert Loeffel to news agency TT on Wednesday.

Police revealed that the little boy had been strangled with a skipping rope.

The 10-year-old came to the attention of police early in the investigation and he has been questioned several times.

“There has never been another suspect than this boy,” said deputy prosecutor Yvonne Rudinsson to TT.

Finally, on Tuesday, he revealed what had really happened on the day in mid-October when 4-year-old Texas died.

According to the prosecutor there was a breakthrough during Tuesday’s questioning.

“I won’t elaborate on what he has said, but new information has emerged in all the interrogations,” Rudinsson told TT.

The police are still classifying the incident as murder but are unwilling to disclose any more of the particulars around the death of the boy, such as what sparked the fight that led to the tragedy.

“As far as I am concerned, the crime is solved,” said Rudinsson to TT.

It has been approximately two months since Texas disappeared from a playground where he had been playing with a group of other children.

The same night, on October 16th, he was discovered dead in a wooded area near his home.

A witness who was in the area that night confirmed that there had been a fight among the children playing in the playground and police have from an early stage in the investigation been working on the theory that a child might be the culprit.