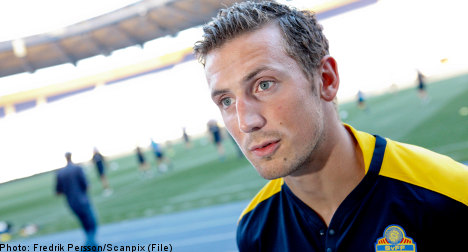 Gerndt, who plays professionally for FC Utrecht in the Netherlands, was fined 80,000 kronor and handed a two-year suspended sentence for after being convicted on two counts of assaulting his wife.

The 25-year-old striker stood accused of pushing his wife through a hedge and then kicking a football at her that struck her in the thigh with extreme force in September 2010.

In another incident from April 2011, Gerndt was accused of backing into his wife with a car door and then later putting her in a strangle hold.

Despite the guilty verdict, Gerndt maintains his innocence.

“I’ve been wrongly convicted. I feel terrible. There’s no truth in what she says,” he said via his agent, Per Jonsson, to Swedish footballing news website fotballskanalen.se.

On Wednesday evening, the Swedish Football Association (Svenska fotbollförbundet) decided to suspend Gerndt from the national team until further notice.

“Gerndt isn’t available for the national team. That would be insulting,” football association head Lars-Åke Lagrell told the Expressen newspaper.

According to Lagrell, the association’s seven board members were unanimous in deciding to suspend the striker, who has scored two goals in six appearances with Sweden’s national side since 2010.

While the suspension takes effect immediately, Lagrell added that Gerndt could appeal the ruling and thus refused to speculate how long the suspension may last.

The next scheduled match for Sweden’s national team is a friendly against Qatar set for January 23rd 2012.