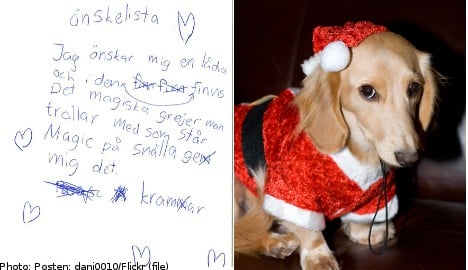 “For many children, a Christmas wish list is the first letter they ever write and I can see that many have made a great effort to send a nice letter to Santa”, says Anette Eriksson, spokeswoman for Posten in a statement.

Every year, more than 100,000 letters pass through the post office on its way to Santa Claus, and the post office places special mail boxes for children around the country where they can post their letters to Santa.

All letters are read by post office staff and every child enclosing his or her address in the letter will receive a gift from Santa.

Post office little helpers annually pick a random mix of 1000 letters to find out what the most popular items on the wish lists are for that year.

When the Swedish post office released its annual rating of things most asked for in letters to Santa Claus for 2011 on Thursday, TV-and-computer games still topped the list, closely followed by a pet.

Another favourite amongst children this year is a mobile phone, which is a newcomer on the list.

The list also indicated that children are indeed very aware of different trademarks at an early age. This year’s most popular brands are Lego, Nintendo, Barbie and Star Wars.

When it comes to phones, a third of the children who asked for a mobile specified an iPhone as their favourite.

Many children also asked St. Nick to bring them a pet of their very own. However, few were specific about what type of pet they were after.

Those who do have a preference generally want a dog. A hamster somewhat surprisingly beat a cat, closely followed by a rabbit or a guinea pig.