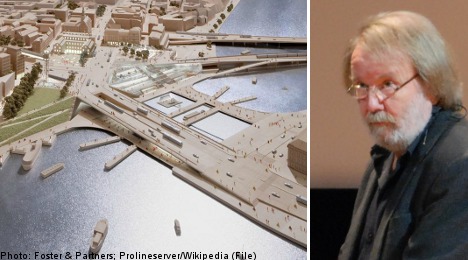 “I have no desire to be a billboard for a city that makes unreasonable decisions like this. I am not available for use anymore. I have not met a single person who is in favour of a highway straight through town”, said Andersson to daily Dagens Nyheter (DN).

Slussen, a central area of Stockholm named after the locks between Lake Mälaren and the Baltic Sea, was last made over in 1935.

In 2009, the city of Stockholm announced a new design featuring two linked pedestrian bridges and one for automobile traffic.

However, from the very introduction of the new plans there has been massive resistance to the proposal, the winner of a 2009 competition to design a plan for the area.

When the building proposal was up for a vote in City Hall on Monday, Andersson went as far as saying he would reunite the former super group for a gig in aid of stopping the plans.

After several hours of debate, the council had on Monday eventually voted in favour of the controversial plan to renovate Slussen.

The opposition attempted to stop the measure by submitting a motion requesting it be sent back for further debate, but this motion was voted down 51-48.

Andersson told DN that he is unwilling to be associated with Stockholm the same way he has previously been, following the decision,

“This is important and the redevelopment of Slussen is a major planning decision. Why should I support a governing body that clubs through an important issue like this based on only three votes outweighing the opposition”, Andersson told Dagens Nyheter.

Andersson also said he thinks that the “face of Stockholm” should be deputy mayor for culture, Madeleine Sjöstedt, rather than himself

Sjöstedt, who refused to listen to Andersson’s and other Swedish celebrities’ pleas to save Slussen, would be a more appropriate front to the billboard at Arlanda instead, according to Andersson.

“Although, ironically, most people will not know who she is”, he said to the paper.

The question of Slussen’s revamp remains a hot topic. Construction is expected to begin in 2013 and to be completed by 2020.