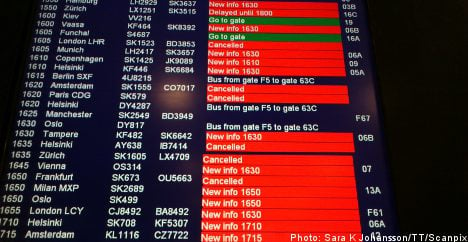 “There are currently disruptions in air traffic to and from the Stockholm Arlanda Airport, due to problems with the power supply to parts of the airport,” the airport said on its website shortly after 3pm.

“Work is in progress to resolve the problem. Updated information will be published as soon as it becomes available.”

“We can’t have any planes land or take off,” Arlanda Anders Bredfell told the Expressen newspaper.

At 4.25pm, however, the airport announced on its website that its power problems had been fixed.

However, it cautioned that delays were possible and urged travelers to contact their airlines for further details.

“Right now there is a queue for flights arriving at Arlanda,” Per Fröberg, a spokesperson with Swedish aviation agency LFV (Luftfartsverket) told the TT news agency around 5pm on Friday.

“Imagine a stoppage on a motorway; even when things start moving again, there is a traffic jam.”

The problem arose shortly before 3pm on Friday afternoon, causing major headaches during one of the airport’s busiest times of the week.

Arlanda spokesperson Jan Lindqvist told Expressen that there are usually a total of 80 take offs and landings on Friday afternoon.

Regardless of how long it takes for the problem to be fixed, airport officials expect major delays.

The cause of the outage has yet to be determined.