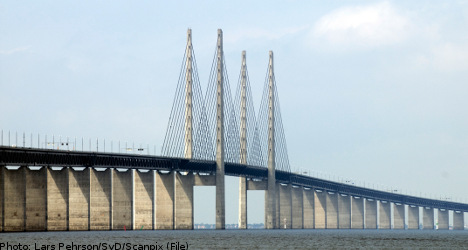 “The tracks on the Öresund Bridge won’t be enough for all trains in the future,” said Malmö mayor Ilmar Reepalu to newspaper Dagens Nyheter (DN).

“That’s why we need to plan for increased capacity now, so commuters aren’t forced to take their cars.”

The subway would cost roughly 13 billion kronor ($1.87 billion), and take 15 years to complete.

Malmö and Copenhagen will be conducting a joint study planned to be completed by the end of 2013, investigating how a subway connection in a new tunnel under the Öresund could increase transport capacity between the two cities and increase growth in the area.

EU’s regional Öresund fund will be contributing 4.5 million kronor to the study, and the two municipalities will provide the same amount.

The Öresund Bridge and the City Tunnel, a railway link completed just over a year ago, are two earlier steps taken to improve connections between the two cities, combining them into a joint region.

Commuters in the City Tunnel were very positive to the idea of a subway connection, when asked by DN’s reporter.

Thursday and Friday saw many cancelled trains due to a strike in Denmark, and trains are filled to the brim with rush-hour traffic.

“The trains work much better since the City Tunnel opened,” said Lisen Zethraeus, who’s commuted to work in Copenhagen for four years, to Dagens Nyheter.

“But an alternative would be great on a day like this.”

The idea is that the new subway line would be drawn between Copenhagen’s and Malmö’s central stations.