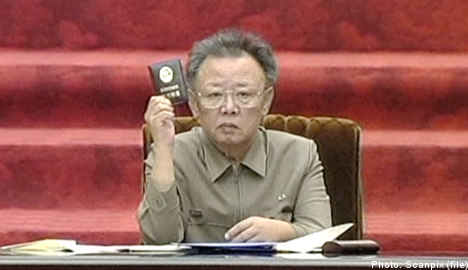 Writing on his blog, Bildt explained that the delay in announcing the death of 69-year-old Kim, who reportedly suffered a heart attack on Saturday, is a sign of “uncertainty in the world’s toughest dictatorship”.

“We don’t know what it will lead to, but history has taught us that dictatorships are never more unsettled than in stages such as this,” Bildt wrote.

“How this might manifest itself is something about which we can only speculate.”

According to the Associated Press, North Korea called the late leader’s son, Kim Jong Eun, who is in his twenties, the “great successor” and urged North Koreans to follow his leadership.

Bildt referenced a March 2010 incident in which a South Korean ship was sunk in what was believed to be an attack carried out by North Korea, cautioning that “it’s not possible to rule out that this pattern will be repeated”.

“There is good reason for the increased vigilance which has been reported this morning by Seoul as well as Tokyo,” wrote Bildt, adding that there is good reason to believe China will also do what it can to “ensure stability in the succession in Pyongyang.