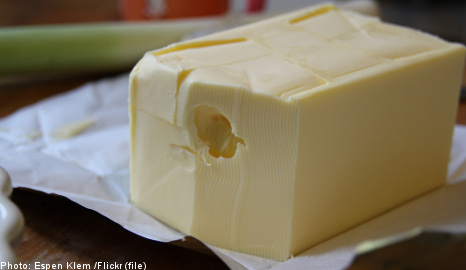 “They allegedly sold the coveted butter packets in Beitstad Steinkjer before they drove north along the county road 17. Then they were stopped by a police patrol, which found 250 kilogrammes of butter in the small van,” said police officer Lars Letnes of the Nord-Trøndelag Police District to Norwegian daily Adresseavisen.

The men had reportedly driven into Norway via the Swedish ski resort Storlien, one kilometre from the Norwegian border, on the night to Saturday.

With them they had brought 250 kilogrammes of butter in 500 gramme packets.

On Saturday evening, police were tipped off about the crafty butter salesmen and were able to apprehend them around 7pm.

Both men were taken in for questioning.

According to Adresseavisen, the two men soon admitted to being in Norway to turn a profit from the Norwegian butter shortage.

”They have confessed that they have bought butter in Sweden to sell at a profit in Norway. They were hoping to make some money from selling butter to Norwegians,” said legal counsel Amund Sand to the paper.

According to Hilde Petterson Ruud, at the border control, the incident is unusual but not unexpected.

”We have heard of black market prices, and it was not a surprise that this happened,” Pettersson Ruud said to Adresseavisen.

Norwegian radio reported on how Norwegians flock over the border themselves and purchase their much need butter in Swedish stores.

On the other side of the Svinesund bridge, separating Norway from Sweden, they are selling twenty times as much butter as they normally do. And nine out of ten butter customers are reportedly Norwegian.

Maybe this had some impact on why, despite the prevailing butter shortage in the country, the men had not been able to unload their overpriced stock.

Sand told the paper that as the butter had not been declared at customs, it will be seized by police and destroyed, no doubt to the horror of many spread-hankering Norwegians.