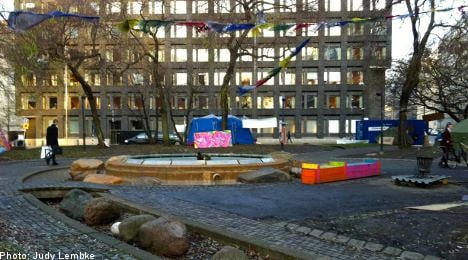 “We don’t have a goal,” says Naima Clevenhag, one of the non-leaders of the movement.

She says that few, if any, of the Occupy movements around the world have a specific goal, other than to spread awareness.

While the main action was going on downtown, other Occupy protests were held in a number of suburbs surrounding the city, as well as in cities on the West Coast of Sweden, in Gothenburg and Malmö.

The following day, after a consensus was reached by the General Assembly, around thirty core protesters moved to Brunkebergs Torg, a small square facing Sweden’s Riksbank. There, they set up tents and prepared for the long haul, which apparently means braving the long, cold, dark Swedish winter.

The camp is a rag tag collection of large military tents and smaller sleeping tents. Signs litter the area, with the expected ‘We are the 99%’ joined by ‘Who are we? Everyone!’ and ‘Whose money? Our money’.

The daily notice board keeps both visitors and occupiers apprised of events in Stockholm as well as what is going on with other Occupy movements around the world, and of course there is the obligatory Facebook page, updated from inside the main military tent, which serves as something of a headquarters, with electricity, computers and television.

Nearly two months after it began there are around 12 protestors still dedicated to the movement. They rotate being on-site, with some spending the night and some just the day.

While there is always one person there to talk to visitors and keep the fires burning others go off to work during the day, while some head home for a shower and some much-needed teeth brushing.

So, why Stockholm? Why Sweden? Sweden regularly places at or near the top of democracy rankings, enjoying a more or less global reputation for openness, egalitarianism, and transparency, so what’s the problem? What’s the goal?

Clevenhag says the movement wants to wake people up and make them understand that this is a critical moment; there are a lot of people in the world suffering at the expense of others, mainly because of the machinations of the financial world, which the movement sees as the root of all the global world problems.

Now, back to that democracy thing. Clevenhag says that many in the movement have the view that Sweden has democracy only once every four years, during the election season.

She says that when you cast your vote every four years there is no guarantee that the elected representative will carry through on promises, and she questions how this can work successfully if people change their minds on any given issue in the interim.

Many in the movement feel they have no real options outside the electoral process to make their voice heard or have their opinions taken seriously.

So what are the alternatives? Is there something that could work better than the current representative system?

Clevenhag suggests another system, promoted by the fringe party Active Democracy (Aktiv Demokrati), which wants to enable direct democracy mixed with representative democracy, with citizens being allowed to vote on any issue before the government via safe digital solutions such as the internet, telephone and automated tellers machines.

According to Clevenhag it’s a system that could work; even if some people aren’t politically engaged, they could have the option of passing their vote on to those who are more active in the political process.

Sounds utopian, everyone having a vote on every single issue the government faces making a decision on each day. But wouldn’t that clog up the machinery just a bit?

“People will be forced to get engaged in what is happening in their country and seek knowledge about the issues we as a people face.”

And she doesn’t think the mainstream media, with each newspaper having a different political colour, would have much impact on people’s opinions as the internet is now a major news source for most people.

According to police spokesman Kjell Lindgren there are a handful of people out each day tending the site and although, in the beginning, the police stopped by several times a day, they now drop in every week or so to say hello, see how everyone is holding up and generally making sure the protesters don’t need any assistance.

According to Clevenhag, the police that have stopped by have been quite interested in the ideas being presented and that there is a good dialogue.

She does note, though, that that while relations with the police are good, Occupy has no intention of keeping them abreast of future plans.

Lindgren says there hasn’t been any trouble, police don’t expect any in the future and there aren’t any plans to break up the camp.

“They’re nice kids who are entitled to their opinion,” he says.

As far as marches being planned for the New Year, police will be keeping an eye on things but taking it on a case by case basis.

Public reaction, despite a few cranks who’ve came by to shout abuse, has been mostly positive, if at times somewhat bemused.

Clevenhag says most who stop by are sympathetic and come away with a greater understanding of what Occupy is trying to do.

So despite the lack of teeth brushing and the increasingly uncomfortable weather, Occupy Stockholm has every intention of pressing on through the winter, with plans to move their site to Stockholm’s much more visible central Kungsträdgården, where they hope the warm weather will bring more attention…and more supporters.