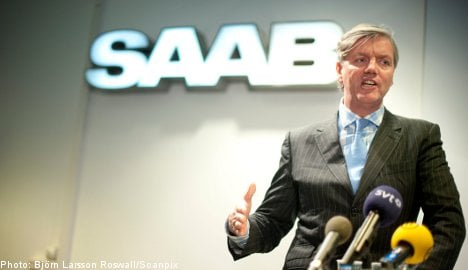 ”This is the darkest day in my career, probably in the history of Saab. But we had no other alternatives,” said Muller as he opened the press conference on Monday.

According to Muller, there are still interested parties willing to take over Saab’s operations, but all such solutions would presuppose that a deal could be reached with former Saab owners General Motors, which has so far scuppered proposed deals involving Chinese owners.

Nevertheless, Muller didn’t rule out a possible continuation of the beleaguered Swedish automaker.

”Even if this may look like the end, it doesn’t necessarily have to be. It could be a new beginning and Saab could rise from the ashes like a Phoenix,” Muller said.

The comments came shortly before the Vännersborg District Court announced it had approved Saab’s bankruptcy petition.

Lawyers Hans Bergqvist and Anne-Marie Pouteaux have been appointed as bankruptcy trustees against the wishes of Saab, which had suggested attorney Mats Emthén.

A hearing has been scheduled for April 9th during which Saab will be required to affirm the veracity of filings detailing its economic situation and list of assets.

Over the last nine months, maybe 50-75 different interested parties have contacted Swedish Automobile about Saab, according to Muller.

”Out of these, maybe five have actually been serious,” he said.

A couple of new parties have been in touch as late as on Monday.

”But it is difficult to determine just how serious they are.”

In any case, Swedish Automobile (Swan) will not be involved in Saab in the future, according to Muller. He didn’t want to comment on GM’s actions at this point.

”That would be inappropriate. But everyone can draw their own conclusions,” Muller said.

Muller said that Saab could have been saved as early as April if the European Investment Bank (EIB) had approved Russian financier Vladimir Antonov’s involvement.

However, according to Muller, he doesn’t regret anything.

”No, that would be juvenile,” he said.

Saab employees, many of which still haven’t had their November pay, now don’t know what is in store for them in the near future.

“It’s so sad,” Ulf Drufva, who has worked at the Trollhättan plant for 39

He added that GM’s blocking of the Chinese deal was “strange.”

“It’s as if GM sees Saab as a threat. And I can’t understand that, as small

”It has been a very difficult day. We’re mostly shocked right now,” said Per Bränneby, chairman of the Akademikerföreningen/Sveriges Ingenjörer union, at the Trollhättan plant.

He doesn’t really know what will happen, but he is hoping that the receiver will find someone to take on the whole company, and that it will happen soon.

According to car industry expert Mikael Wickelgren at the University of Gothenburg, it is still too early to say if this spells the end for Saab.

”Yet again it is a question of money. Ultimately, it will be up to the receiver to decide what happens now but there is of course an imminent risk that Saab will cease to manufacture cars in Trollhättan,” Wickelgren told The Local.

Although GM’s decision to veto Youngman was the trigger for Monday’s decision, Wickelgren thinks that there have been many other contributing factors causing Saab’s current predicament.

Despite it still being conceivable that a new buyer turns up in the eleventh hour and resurrects the ailing auto maker, Wickelgren thinks it is probably not very likely.

”My view is that there is a very slim chance for that to happen. This has been going on for some time and if someone was really serious about it they would have come forward by now,” said Wickelgren to The Local.