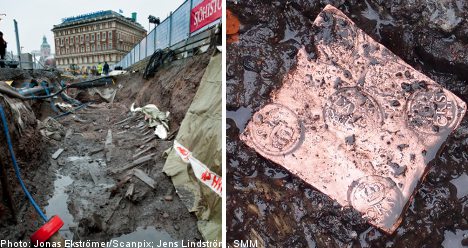 “I’ve never before come across so many well-preserved artifacts,” Jim Hansson, project leader for the museum’s dig, said in a statement, citing rigging, tools, hand-blown glass, and coins among the items found at the site.

“It’s going to be exciting as we move forward, but also a challenge to carry out this sort of examination in the winter time.”

According to the museum, the five wrecks date from the 1500s to 1700s and were unearthed in connnection with renovations being carried out on Strömkajen near Stockholm’s historic Grand Hotel, a popular destination for tourists visiting the Swedish capital.

“The discoveries shed light on the naval shipyard where among others the royal warship Vasa was built and on various periods of the city’s history,” the museum said.

The ships are in good condition, with several of them measuring 20 meters (66 feet) in length.

Archeologists were also delighted with other discoveries made near the ships.

“The findings, which include tools and household items, reveal how people lived in Stockholm in the 1500s and early 1600s,” Andreas Olsson, in charge of archeology at the museum, told Swedish news agency TT.

It is not known why the ships sank.

“Because the wrecks ended up there during a time when the shipyard was in use, they may have had something to do with the navy,” Olsson, said in a statement.

That vessel was built with an almost completely unknown technology, whereby the planks of the ship were sewn together with rope, rather than nailed down.

With the exception of another ship found in 1896, all other shipwrecks uncovered in and around the Stockholm harbour have featured planks that were nailed together.

Earlier this year, Sweden celebrated the 50th anniversary of the raising of the Vasa, a 17th century royal warship that was the jewel of the Swedish navy when it sank in a Stockholm harbour just minutes into its maiden voyage in 1628.

It is now housed in a Stockholm museum built especially for it, and is the biggest tourist attraction in Sweden.