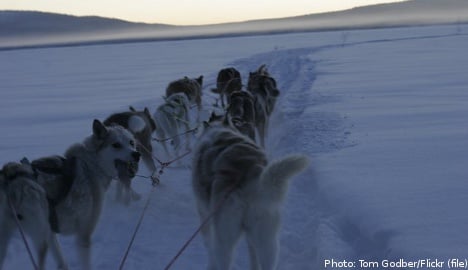 The dogs in the picture are not the dogs involved in the accident.

“The car and the dog sled crashed into each other,” confirmed police officer Uno Nilsson to local paper Norrländska Socialdemokraten (NSD).

Police received a call that an accident had occurred in the late-afternoon darkness at a designated dog sled crossing on the road to the Esrange Space Centre, outside of Jukkasjärvi.

Five people were in the sled when it collided with a car at the crossing, causing it to veer straight in the ditch. The driver, having tried to avoid a crash, went the same way, and as the car overturned it fell on top of the sled, trapping two of the passengers underneath.

The injured passengers were taken to a local hospital and the first reports stated that two were seriously hurt while three had sustained minor injuries.

Later, local authorities issued a statement saying that one man had died from the accident and that a woman had been moved to the Umeå hospital for further treatment due to the serious nature of her injuries.

The driver of the car is reportedly in shock after the incident, according to NSD.

Four of the passengers in the sled were tourists and the fifth was a guide. Two of the tourists were guests at the Ice Hotel in Jukkasjårvi, while the other two stayed at nearby hotel Scandic Ferrum.

Police were busy on Monday evening verifying the identities of those involved in the accident and contacting their relatives.

The dogs pulling the sleigh were reportedly unscathed in the incident.