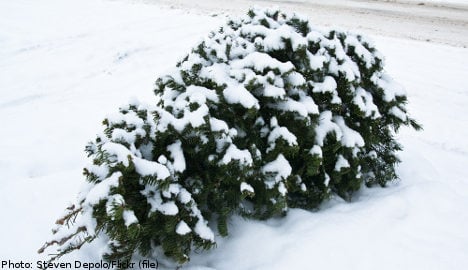 The tree in the picture is not one of the ones mentioned in the article.

Police received a tip off from someone who said they had seen a man and a woman rooting around under a tree-seller’s tarpaulin at Vaksala Torg in central Uppsala.

”It was a couple in their thirties that dragged off three Christmas trees that one of the sellers had left at the square,” said Sundin to the paper.

But the tree-thieves hadn’t counted on the Uppsala police’s investigative talents.

Following the tracks in the snow by the pilferers as they dragged the stolen trees away, police were soon able to find the culprits.

The couple are now under suspicion for theft with an alternative charge of shoplifting.

”It really depends on what the value of the trees are, if it exceeds the limits for shoplifting,” Sundin said.

Recent home decorating trends have resulting in a rise in how much Swedes have been willing to pay for their Christmas trees, according to tree sellers.

However, this year seems to be showing a break in the trend.

”It would seem that people are choosing a less expensive tree this year,” said Håkan Bengtesson of tree-seller Landvettergran to daily Dagens Nyheter (DN).

And some are obviously not willing to pay anything at all.

A recent study showed that one in five Swedish Christmas trees are stolen, although in most cases this means that revellers have snuck out in forested areas and felled their own evergreen.

Although many Swedes don’t see this as more serious than taking an apple from someone’s tree without asking, it is a real problem for landowners.

”The losers are the small forest owners who get their land thinned out year by year,” said Esbjörn Wahlberg of Sveaskog, Sweden’s largest forest owner and leading supplier of timber to Sveriges Television (SVT).

However, those that are planning to take to the woods without first contacting the landowner should beware, as crafty forest owners have a new weapon up their sleeve.

According to Lars-Åke Letskog at forest owner association Mellanskog, forest land owners sometimes pour a mixture of urine and water on the trees to ward off thieves.

“They pour it over the trees so that when the Christmas tree is brought inside it smells bad,” he told Sveriges Radio (SR).

CHRISTMAS
How to make your own Christmas julbord if you live outside Sweden
Url copied to clipboard!