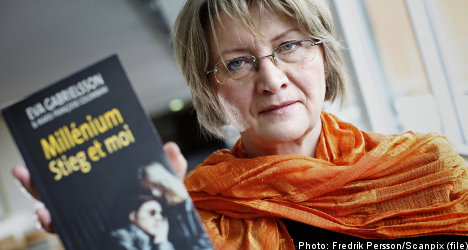 “We would never have sold any rights for merchandising,” Eva Gabrielsson told the AP news agency.

Gabrielsson, who was in a relationship with Larsson for more than 30 years before he died of a heart attack in 2004 at age 50, has been engaged in a long-running dispute with Larsson’s family over the rights to the estate of the late-author.

The journalist-turned-novelist died without a will, and the couple never had children.

Under Swedish law, Larsson’s assets — including copyrights — thereby automatically went to his father and brother, leaving Gabrielsson with nothing.

The two have disputed Gabrielsson’s claims, outlined in a memoir published in January 2011, that they profiting from Larsson’s literary legacy.

According to them, the revenues from the best-selling books have gone to the anti-racist activities of Expo, the foundation and magazine that Larsson helped establish, as well as women’s shelters and protection for threatened journalists.

“We have no intention to use the money in any other way than as Stieg intended,” the late author’s younger brother, Joakim Larsson wrote in a statement issued after the publication of Gabrielsson’s book.

According to Gabrielsson, the decision to use Salander, who she claims is part of the feminist “movement”, distracts from the political dimension of the book to highlight the “oppression of women”.

“It has nothing to do with books,” she said of the merchandising surrounding the Hollywood version of “The Girl With The Dragon Tattoo”, set for release in Sweden and the United States this week.

The film, directed by David Fincher, is the first US interpretation of a book that has captivated the world since its posthumous publication in 2005, a year after his death, selling 65 million copies in 46 countries.

He is joined by young US actress Roney Mara as talented hacker Salander. Mara’s powerful performance earned her a Golden Globe nomination for best actress in a drama this week.

Speaking with AP, however, Gabrielsson questioned whether Mara, who suggested that Salander isn’t a feminist, had done the justice to a character who represents “active resistance to the mechanisms that mean women don’t advance in this world”.

“Does she know what film she has been in?” Gabrielsson said.

“Has she read the books?”

According to Gabrielsson, the English title of the book and film sounds like a “children’s book” and fails to capture the “basic theme” of Larsson’s original novel, which in Swedish was entitled “Man som hatar kvinnor” (‘Men who hate women’).