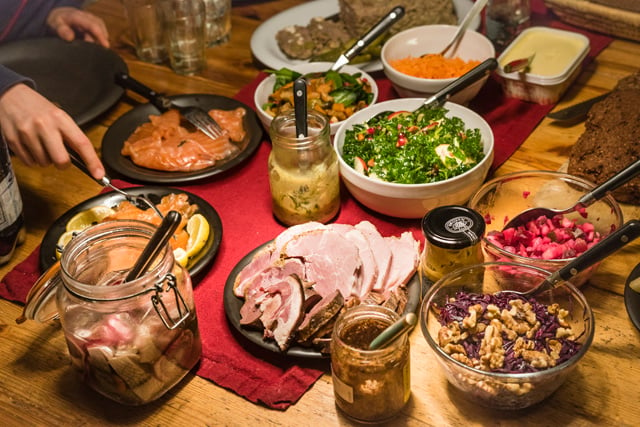 The Swedish julbord is an extensive spread that has evolved from a variety of traditions.

If you didn’t grow up with the julbord tradition it may appear to simply be a buffet of everyday foods, but the julbord (literally Christmas table) is near and dear to many a Swede’s heart.

Understanding the history of some of the more common dishes sheds some light on how the Swedish julbord came to be.

Although there is some variation from household to household as to what appears on the julbord there are several standard dishes that are usually tackled in three courses.

Click here for a look at some staple julbord foods.

The first generally includes a variety of pickled herring and cured salmon, the second is bread, ham, liver pâté, red beet salad, and cheese, and the final course is comprised of the warm dishes with Janssons frestelse, dopp i grytan, meatballs, sausages, pork ribs, and cabbage.

It wasn’t until the 10th century that Christianity began to take hold in Sweden and naturally many of today’s customs surrounding holidays emerged from those initial Catholic beliefs.

These traditions had a strong hold on society by the time of The Reformation under Gustav Vasa in the 16th century and they often continued despite the break from the Catholic church.

The flood of food on Christmas Day is reminiscent of the celebration after a period of fasting from the beginning of Advent until midnight on Christmas Eve.

Pork is a significant element in the julbord. The obligatory julskinka, or Christmas ham plays a starring role despite the fact it didn’t become common on the julbord until the end of the 1800s.

Pigs were important domesticated animals historically since they produce large litters in a short gestation period, grow quickly, and can be fed relatively inexpensively on a wide variety of food options.

Historically the slaughter of animals began in the fall and salt pork was the typical year-round meat ration. What was cured in the fall had to last until the following fall.

But a couple of pigs were always saved as close to Christmas as possible.

Their slaughter traditionally took place in the dark, often on December 13th or Lucia Day, which was long considered the darkest day of the year.

The Christmas feast was particularly special because it was the time of year when people ate fresh meat such as revben (ribs), boiled pork sausage, liver pâté, brawn, and even pig’s feet in aspic.

The broth in which the meats were cooked even became part of the festivities with dopp i grytan or “dipping in the pot.” Although you couldn’t eat the meat until the end of the fast, dipping bread into the cooking broth was allowed and it helped to soften hard bread.

The dopp i grytan tradition was so widespread that Christmas Eve became known as ”dopparedagen” or ”dipping day.”

Although they no longer play a significant role in daily life, homage to the pig can be seen at this time of year from marzipan creations in pastry shops to a variety of Christmas ornaments and decorations.

Lutfisk is a notorious Swedish Christmas dish and another remnant of the fasting tradition. It was common fare during the Christmas fast when meat was replaced by fish at a time when fresh fish was hard to come by.

The dried ling or sathe was alternately soaked in water and lye to make it edible again (although some people would say that doesn’t help).

Slathering it with a white sauce, melted butter, and even ground mustard in the southern part of Sweden helps to make the gelatinous, reconstituted fish more palatable.

Once only considered food for the poor, pickled herring has regained respect on holiday tables in Sweden. It has long-standing importance in Swedish culture providing valuable protein during the cold, dark Scandinavian winters.

Red beets and cabbage were standard winter fare and have earned their place on the Christmas table. Pickled red beets were a typical accompaniment to pork and today a red beet salad mixed with herring and whipped cream is often found on today’s julbords.

The importance of cabbage in the Swedish diet pre-dates the potato which didn’t become popular until the end of the 18th century.

Whether the spread includes white, red, or green cabbage often depends on geography with the white cabbage being more common in southern Sweden and red more common in the central part of the country.

Since the potato is a relatively late arrival to Sweden, Janssons frestelse is a more modern addition to the spread.

The recipe wasn’t published until 1940 but the casserole made-up of julienned potatoes, sliced onions, anchovy fillets and cream is a well-loved favorite at Christmas as well as other festive occasions throughout the year.

Meatballs are another standard dish and everyone has their own family recipe. Although meatballs are found in many different world cuisines Swedish meatballs are arguably the most well-known with the world-wide phenomenon of Ikea.

Initially they were a dish that was only enjoyed by the upper classes but the increased availability of wood stoves and meat grinders in the 1850s made meatballs accessible to the middle classes.

And just when diners are about to pop, rice pudding rounds out the julbord meal.

Historically it was the principal Christmas and harvest feast dish because it was easy to make in large quantities. For about 200 years, rice has been the main grain but prior to that it was barley.

Every culture has their own traditions and customs and understanding their background is key to getting the most out of them.

If you are new to the julbord tradition embrace it on Christmas Eve and share your new-found knowledge of the julbord with your hosts.

If you still aren’t feeling the julbord love and are in a bind because you will be staying with Swedish relatives over the Christmas holiday, consider offering to be the chef for Christmas Day.

It’s the best of both worlds; a chance to share your own culture as well as provide a well-deserved break from the kitchen for your hosts.

Maia Brindley Nilsson is a designer and food enthusiast based in Malmö, Sweden. Her food blog semiswede is “sort of about Sweden, and sort of not.”