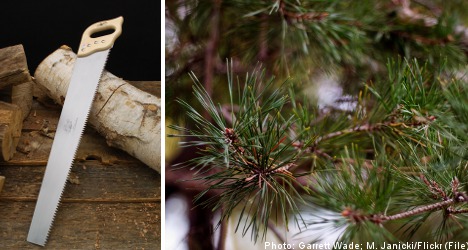 The man was visiting a friend on the island’s northwestern coast last summer when, in the midst of a night of drink-soaked revelry, the friend told of a dispute he was having with his neighbour.

The 46-year-old learned that the woman living next door to his friend had rebuffed repeated requests to remove several pine trees on her property.

The friend wanted the trees cut down so he could have a better view, the local Gotlands Allehanda newspaper reported.

Later that night, bolstered by a healthy dose of liquid courage, the 46-year-old visitor stormed over to the neighbour’s yard brandishing a handsaw and proceeded to cut down three pine trees and damage three others.

On Thursday, the 46-year-old man was convicted of aggravated vandalism for the pine tree “massacre”, which he referred to as a “drunken prank”.

The Gotland District Court handed the man a two month suspended sentence, fined 10,000 kronor ($1,460) and ordered him to pay 179,500 kronor in damages to the woman whose trees he felled.

In its ruling, the court explained that the 46-year-old’s use of a hand saw clearly signified intent, as the incident would have likely been “relatively drawn out”.

The woman who lost her trees to the antics of loaded would-be lumberjack is passionate about gardening, according to the newspaper, and has been seeing a therapist in the wake of the incident to help her cope with the loss.