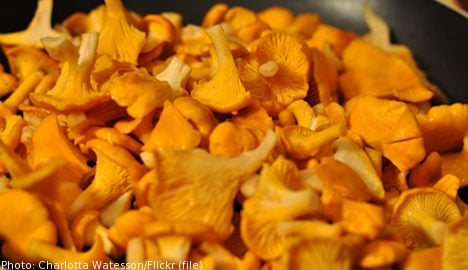 According to local paper BLT/Sydöstran, Nilsson made her Chanterelle discovery in Tokaryd, a small town in Blekinge, southern Sweden.

Nilsson admitted that it was on the horse Pedrolina’s initiative that she made the surprising find.

Nilsson confessed she is not big mushroom fan herself, so she gave the mushrooms to Pedrolina’s owner.

According to Lars-Åke Janzon, a biologist at the Natural History Museum in Stockholm, the find is extremely unusual for this time of year.

“I have never heard of such a thing before. It isn’t usual for Sweden at all, neither in the north nor the south. The explanation has to be the warm weather we’ve had for such a long time. The chanterelles think it is still autumn,” Janzon told Kvällsposten.

Nilsson said Pedrolina’s owners have enjoyed the mushrooms over dinner and had planned to include them in the family’s Christmas dinner as well.

There was reportedly no difference in flavour in the winter mushrooms compared to those from earlier in the season.